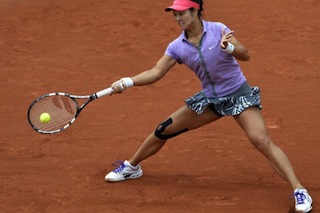 Former champion Li Na, the second-seeded Chinese superstar and Australian Open winner, was sensationally dumped out of the French Open in the first round Tuesday, beaten by a tearful Kristina Mladenovic.

Mladenovic, who was Australian Open mixed doubles champion this year with Daniel Nestor, goes on to face Alison Riske of the United States for a place in the third round.

“It’s just incredible,” said Mladenovic, who was 36 in the world last Ausgust.

“I don’t have the words to describe what just happened. To beat the world number two in the first round at Roland Garros, it’s incredible. Without the crowd, I could not have done it.”

Li’s shock defeat means that both Australian Open champions have been knocked out in the first round after Stan Wawrinka’s listless defeat on Monday.

Karlovic fired 22 aces and wasn’t broken by Dimitrov who won the Bucharest claycourt title this spring and was a semi-finalist at the Rome Masters.

The 35-year-old Karlovic has now equalled his best French Open performance and next faces either Daniel Brands of Germany or Austria’s Andreas Haider-Maurer.

Romanian fourth seed Simona Halep reached the second round with a 6-0, 6-2 win over Russia’s Alisa Kleybanova and next plays Heather Watson of Britain.

The 22-year-old Halep, the winner of seven career titles and a runner-up to Maria Sharapova at the Madrid Open claycourt event this season, raced into a 6-0, 5-0 lead before Kleybanova stopped the rot.

But the Russian, ranked 87 in the world and playing in Paris for the first time since 2010 after undergoing cancer surgery, was eventually undone by her 32 unforced errors as Halep wrapped up victory in 56 minutes.

“But I stayed focused after two games lost, and then I served really well.”

Ferrer, 32, has reached the quarter-finals or better at his last nine majors.

Murray, 27, the Wimbledon champion, was a semi-finalist in 2011 but skipped the 2013 tournament through injury.

He has defeated world number 53 Golubev in both their previous meetings without dropping a set.

A quarter-finalist in 2010, the 23-year-old won her first six meetings against Wickmayer before the Belgian broke that streak in Doha this year.

His fellow Australian Bernard Tomic, now down at 80 in the world, takes on French 12th seed Richard Gasquet who is chasing his 100th career win on clay.

Gasquet has never got beyond the fourth round in Paris despite twice being a semi-finalist at Wimbledon and the US Open.

He had endured a roller-coaster year with a first round, injury-hit exit at the Australian Open followed by double hip surgery and then a 28-minute defeat to Jarkko Nieminen in Miami — the shortest completed match in history.

German 36-year-old Tommy Haas, the 16th seed, can become the oldest man since Jimmy Connors in 1991 to reach the second round if he defeats Jurgen Zopp of Estonia.