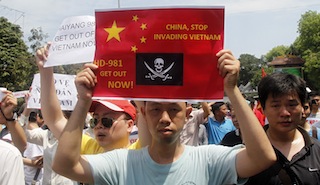 Vietnam on Tuesday accused a Chinese ship of ramming and sinking one of its fishing boats, fanning territorial tensions over Beijing’s deployment of an oil rig in contested waters.

The incident, which China’s rival Japan described as “extremely dangerous”, comes during an ongoing tense confrontation between the communist neighbours in the South China Sea that has triggered international alarm.

The fishing vessel’s crew, who were rescued by other Vietnamese ships after the Monday afternoon incident, said their boat was encircled by 40 Chinese vessels before being attacked, the official Vietnam News Agency reported.

“I confirm that the fishing vessel was rammed,” an official with the Vietnam Regional Maritime Search and Rescue Coordination Centre in the central city of Danang told AFP.

The sinking occurred about 12 nautical miles southwest of the rig, the official added, requesting anonymity.

“The 10 fishermen on board are on land now. They are safe. The ship sank.”

Beijing’s official Xinhua news agency blamed the Vietnamese vessel for the collision, saying it had “capsized after harassing and colliding with a Chinese fishing boat”.

It was the first ship reported sunk since the dispute flared in early May. The standoff has seen repeated skirmishes between dozens of Chinese and Vietnamese vessels, including many civilian and fishing boats.

The confrontations have included reported rammings and the use of water cannon.

Relations between frequently testy neighbours Vietnam and China have plummeted over the oil rig’s presence, which has worsened an increasingly heated dispute over territorial claims in the area.