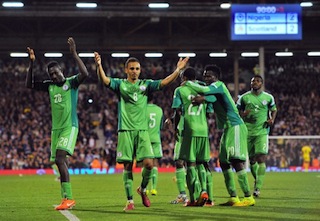 Nigeria's striker Peter Odemwingie (2ndL) thanks the fans after their second goal during the international friendly football match between Nigeria and Scotland at Craven Cottage in London.
Photo: AFP

Players of the Super Eagles have said they don’t envy Coach Stephen Keshi at this very difficult period.

They said this after Nigeria’s pulsating 2-2 draw against the Tartan Army of Scotland on Wednesday at the Craven Cottage in London.

A statement by the Media Officer of the team, Ben Alaya, reported the team captain, Joseph Yobo, at the post match conference, as saying that if he was the coach, he would find it difficult to drop any of the players currently in the 30-man squad.

“Nigeria is blessed with talents and that is why I think all the players here merit to be in Brazil, even when we have some other very good ones still hanging out.

“If you watch the game against Scotland, you will know that the ‘Big boss’ needs to be pitied over dropping players and picking those who will make the final 23. It will be tough,” Yobo said.

Stoke City forward Osaze Odemwingie said he was happy at the response of his teammates to his return to the national side.

“But how do we drop players now from this squad. Everybody here is good but we should leave that to the coach but I know it would be a tough task,” he said.

Former Newcastle striker, Shola Ameobi, declared that playing for the Nigeria made him a better team player because of the quality of players in camp and wished he had started playing earlier for the team.

“We are all good but we should just pray for the coach to ensure that he picks the best for the World Cup.”

Towering defence ace, Azubuike Egwuehwe, put it more succinctly: “When I was going into the match against Scotland, I said to myself O’boy you are on trial; now I know that its our coach who has a really difficult job of picking the 23 players for Brazil 2014.”