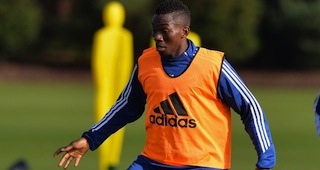 Kenneth Omeruo has signed a new deal at Chelsea. Chelsea Football Club announced the new deal on its website.

“Chelsea Football Club is delighted to announce Kenneth Omeruo has signed a new contract which will keep him at the club until 2018.

Omeruo who joined Chelsea from Standard Liege in January 2012 and upon signing went on loan to Dutch top-flight side ADO Den Haag said he was happy to have extended his stay at the London club.

“I’m thrilled to sign a new contract with Chelsea and I’m really excited about the future.

“To play at such a fantastic club is a real honour for me and I’ll be working incredibly hard to be successful. I’ve thoroughly enjoyed my time in England so far and can’t wait to get going.”

The 20-year-old defender, who is part of the Nigeria World Cup squad plays as a centre-back but can also comfortably play on the right.

Omeruo made one appearance for Chelsea’s Under-21s in November having recovered from a shoulder injury that kept him sidelined at the beginning of the campaign. He then spent the second half of the season on loan at Middlesbrough in the Championship, where he made 14 appearances.