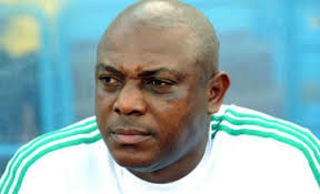 Super Eagles head coach Stephen Keshi says he already has an idea of the players who will make the 23-man squad to the 2014 FIFA World Cup in Brazil.

Keshi said this on Friday after the Nigerian senior male football team had their first work-out at the Philadelphia Eagles Stadium in Philadelphia, United States.

He however said he would still wait till the last minute before making it public. The final day for the submission of the list to world football governing body FIFA is 2 June.

Keshi, who nonetheless said he was thrilled by the level of tactical and technical depth displayed by the players, said there was a need to be cautious.

“I have an idea of those who will go with us to Brazil but we will still wait till the last minute before we announce the list,” the team’s Media Officer, Ben Alaiya said through a statement.

Keshi said he was delaying naming the list so as to have a second look at those who are not measuring up.

The national team had their first training session on Friday morning in Philadelphia and are scheduled for another one later in the evening at 4:30 p.m. local time, which was 9:30 p.m. Nigerian time.

NAN reports that the 2014 FIFA World Cup is scheduled for June 12 to July 13, with Nigeria in Group F alongside Argentina, Iran and Bosnia-Herzegovina.