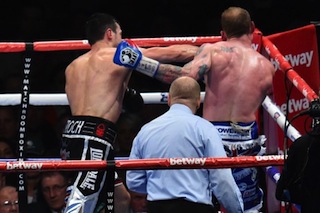 Carl Froch admitted the lure of boxing in Las Vegas for the first time is tempting after knocking out George Groves in the eighth round on Saturday.

Froch described the straight right that flattened his British rival Groves as the best of his career after he defended his International Boxing Federation (IBF) and World Boxing Association (WBA) super-middleweight titles.

Following the controversy of Froch’s ninth round stoppage win over Groves in November, which the challenger insisted was premature, the ending could not have been more unequivocal in front of 80,000 fans at Wembley Stadium.

Froch, 36, refused to identify a preferred opponent for his next – and possibly last – bout, with fellow Briton James DeGale a possibility after he won an eliminator for the IBF belt on the undercard. Sakio Bika, Cameroon’s Australia-based World Boxing Council (WBC) champion, was also at the news conference to challenge Froch to a world title unification bout.

But Froch, from Nottingham, seemed to prefer the idea of fighting in the world’s fight capital rather than settling another domestic dispute with DeGale.

“I’m going to have the summer off before I even discuss what I do with boxing,” Froch told a news conference. “That was one of the best nights of my career. What ever I do now in boxing I will be a happy man but that’s not saying I’m going to retire.

“This evening will be hard to top, with it being the biggest fight in Britain since the Second World War.

“But there is one box that is not ticked and that is Las Vegas. I’ve never boxed there, never had my name up in light down the Las Vegas strip and before I retire it might be something I want to do. DeGale fought well but I’ve got a voluntary defence.”

It had been a tense affair until Froch’s one-punch demolition of Groves two minutes and 35 seconds into the eighth.

Froch had been floored by Groves in the first round of their first encounter and early on the champion adopted a cautious approach.

“I didn’t rush in,” Froch told a news conference. “I thought it was close and I felt I was one or two rounds ahead. I knew the shot was going to come as soon as I closed the gap because I was hurting him.”

But the three-time world champion relaxed more and became more aggressive as the fight wore on until seizing his opening in the eighth round with Groves hovering by the ropes.

Groves’ fight was over the instant Froch brought over a straight right hand on to the challenger’s chin. Groves tried to get up, but there was no controversy over the stoppage this time and he was still on wobbly legs several minutes later.

“That’s the best punch I’ve thrown in my life,” Froch told a news conference. “It’s one of the most satisfying nights of my life because I’ve had George Groves in my earhole for a year.”

Groves felt he was ahead on points and blames a moment of complacency on being caught by the knockout blow.

“I felt I was ahead on the scorecards and I was in my groove, but I think complacency let me down,” Groves told a news conference.

“Carl Froch is a seasoned world champion and there’s no quit in him. I was boxing very well and I let complacency creep in and that needs to be eliminated.

“I allowed Carl Froch into range and I paid the price for it. It was a split second that let me down and until then I had been boxing very well. I felt I was winning very comfortably. I was dominating him with the jab and he wasn’t able to find his range.

“But I will come back stronger and I will be world champion.”

DeGale produced arguably the best performance of his professional career after winning gold at the 2008 Olympics as an amateur, crushing American Brandon Gonzales in four rounds.

DeGale floored Gonzales twice in the fourth round of the eliminator for Froch’s IBF belt, and insists he would handle the champion better than Groves, who he was narrowly out-pointed by in 2011.

“I’ve always said I’m all wrong for Carl Froch. I’ve got huge respect for the man but when we fight I’m very confident of beating him,” DeGale told a news conference. “I wouldn’t get into that position to be hit with one of those big right hands.”