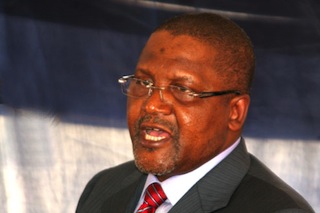 The President of the Dangote Group of Companies, Alhaji Aliko Dangote, has pledged to partner with state governments in the North East to develop the area.

Speaking with journalists during a condolence visit to the palace of the late Emir of Gombe, Alhaji Shehu Abubakar, the business mogul said he would invest in agriculture to ensure the development of the geo-political zone.

Dangote said he had spoken with the late emir about six months ago when they discussed the potentials of investments in the state.

He said he had promised the emir that he would come to the state to concretise the discussion but that he could not do so before he died.

He, however, assured the government and people of the state that he would redeem his promise to invest in the state.

“We will still come. We have to make sure that we empower our people mainly in the northern part of Nigeria where the need is there.

“We will definitely look at the best way to help and mobilise our people to at least get a daily income,” he said.

The billionaire said the easiest way to assist the people in the North East zone was by helping the farmers to access credits to boost agricultural production.

“Even when you have the farm, you have the will to go into farming, unless you are helped financially, there is nothing you can do about it.

Dangote had earlier condoled with the Gombe emirate, the government and people of the state over the death of the emir.

He described the late emir as a great leader who was respected not only in the North East but across the country.