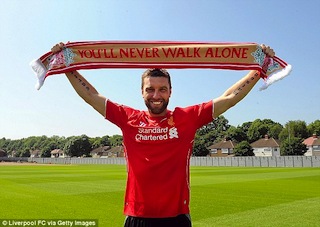 Liverpool on Monday completed the signing of England forward Rickie Lambert from Southampton, who should bolster a strike force that almost fired the Reds to the Premier League title.

The former Liverpool trainee underwent a medical on Saturday after a fee of £4 million ($6.7 million, 4.9 million euros) was agreed with the Saints.

He is understood to have signed a two-year contract.

“I know how big Liverpool are — and it means everything to me — but I know what is important; I know it’s what I do on the pitch and the minutes I play. I know that’s what matters, and that’s what I’ll be focused on.”

Lambert is among England manager Roy Hodgson’s 23-man World Cup squad, currently at a training camp in Miami ahead of the tournament in Brazil.

The striker, who has two goals from four England caps, has emerged as an important squad player since scoring against Scotland with his first touch as an international footballer in a friendly last year.

He did not feature in England’s 3-0 warm-up win over visitors Peru at Wembley on Friday and faces competition from new team-mate Daniel Sturridge, plus Manchester United’s Wayne Rooney and Danny Welbeck, for a starting place in Brazil.

Liverpool-born Lambert supported the club as a child and was a member of the Reds’ youth academy for five years before being released as a 15-year-old.

He worked in a beetroot factory before his professional career finally got going.

He spent years in the lower leagues of English football with the likes of Rochdale, Stockport and Bristol Rovers before finally hitting the big time with Southampton following their promotion to the Premier League.

He scored 14 goals in 39 games last season and has 117 in 235 appearances since joining Southampton in 2009 after they were relegated to the third-tier League One.

While they nearly fired Liverpool to the Premier League title — they finished second, two points behind champions Manchester City — the Reds often looked toothless when their star strikers were held in check and Lambert would be an ideal remedy.

He could soon be joined at Anfield by Saints team-mate Adam Lallana, with Liverpool currently trying to negotiate a £30 million deal for the England midfielder.

Managerless Southampton, who finished the season eighth in the Premier League table, said they had received multiple offers for some of their players in recent weeks but had “no need to accept any offers”.

However, the Saints said they did not want to stand in Lambert’s way after he asked to leave for his boyhood club.

Chairman Ralph Krueger added: “Rickie has been a shining light in Saints’ growth and will forever remain an icon in the history of the club.”

In an open letter to Saints fans, Lambert said he had fulfilled his dreams “and more” in firing the club from the third tier to the top flight.

“Southampton have allowed me to realise a lifelong ambition by joining Liverpool FC and taking my family home,” he said.