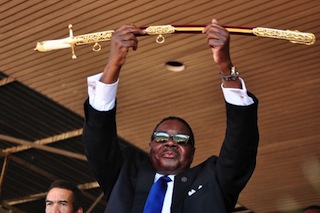 Malawi, traditionally dependent on Western aid donors, will look for “new friends” in countries such as China and Russia, newly elected President Peter Mutharika said at his inauguration Monday.

The ceremony at a stadium in the commercial capital Blantyre was boycotted by outgoing president Joyce Banda, who was soundly beaten by Mutharika in disputed elections held on May 20.

Mutharika, who takes power in one of the world’s poorest countries where 40 percent of the budget comes from aid, said the donor nations were “welcome to stay here”.

Foreign policy would be based on what is best for Malawi, he said.

“We will continue with traditional relationships, but we are now looking for new friends in emerging economies such as Brazil, China, India, South Africa and Russia.”

Britain and the United States have pledged to work with his government.

Mutharika said he regretted Banda’s absence, saying she had “declined to come here and hand over power to me.

“I was looking forward to shaking her hand and burying the past. I have an olive branch in my hands.”

A spokesman for Banda said: “She was not officially invited and her official presidential convoy was withdrawn early hours of Saturday as soon as it was announced that Peter Mutharika had won the presidency.

“It would have been difficult for the outgoing president to travel to Blantyre.”

Banda received a further political blow when her party was declared to have won only 13 percent of the parliamentary seats, according to results announced by the electoral body late Monday.

The Malawi Electoral Commission said the People’s Party won 26 of the 192 seats which were contested by 1,293 candidates from 17 political parties.

Up to 52 independents won their seats across the poor southern African state, representing 27 percent.

A party needs 100 seats to enjoy a simple majority in parliament.

According to the results, the trend was similar in the municipal elections, with Banda’s party winning 65 of the 462 wards.

Mutharika takes over despite facing treason charges for attempting to conceal the death in office two years ago of his brother, Bingu wa Mutharika, in an alleged bid to prevent Banda — then vice-president — from assuming power.

“It’s been a long journey,” Mutharika said of his ascent to power. “We didn’t know we would reach this far and be here today.”

“I have been imprisoned and tried on flimsy charges of treason,” he said. “I have been tear-gassed three times. But that’s all in the past.”

He said he had no intention of “revenging or vengeance”.

The treason charges against Mutharika are likely to be dropped as Malawian presidents have immunity from prosecution while in office.

But there has been speculation that Mutharika might now try to turn the tables on Banda and have her charged with corruption over a $30 million (20 million euro) graft scandal dubbed “Cashgate”.

Banda has claimed the credit for uncovering the fraud, which saw aid money syphoned into top government officials’ pockets. But critics, including Mutharika, suggest the funds went into her party’s election war-chest.

“Those who have broken laws of this country will meet the full course of justice,” he warned in his speech.

Banda had alleged anomalies in the election and sought to have the vote nullified.

Legal attempts to force a recount failed and the electoral commission declared Mutharika winner with 36.4 percent of the votes cast against Banda’s 20.2 percent.

Banda on Saturday congratulated Mutharika on his victory.

Mutharika, wearing a black suit with a white shirt and blue tie, entered the stadium in a Land Rover, waving a blue hat to a cheering crowd that filled the stadium.

Having worked under his brother as an advisor and minister, Mutharika has a task to prove that he is his own man.

“I hope this one will be a better president than his brother who was very confrontational with donors and critics,” said housewife Jean Namondwe from Chinyonga township in Blantyre.

She vividly remembers the “serious shortages” of fuel, food and medicines in hospitals during the last months of Bingu wa Mutharika.

“We cannot go back to those dark days,” she said.