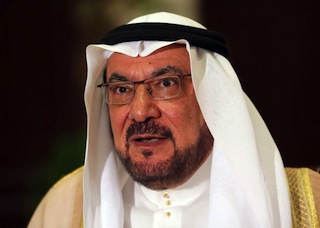 The Organisation of Islamic Cooperation (OIC) on Monday in Abuja described Boko Haram as a criminal group whose members were misusing Islamic religious doctrines to perpetrate violence.

The Secretary-General of OIC, Iyad Madani, said this while speaking with State House correspondents after a meeting with President Goodluck Jonathan at the Presidential Villa.

Madani, who met with President Jonathan behind closed doors, said OIC was concerned about the evil being perpetrated against the people of Nigeria by Boko Haram.

“We are here to express our solidarity with Nigeria in facing up to this terrorist organisation and to condemn the terrorist acts they have been committing and to show our condolences to the Nigerian people.

“The OIC has issued statements that were very clear that these people are outlaws.

Madani said that the body was particularly concerned because the activities of Boko Haram ran contrary to the principles of living together, history, and the culture of tolerance that Africans were known for.

“Africa, we keep saying, is a model of such tolerance. Its history is the history of tolerance, and of living together; we keep saying that the African tradition is something that needs to stay.

“This is where the principles or OIC position is. There are of course the economic and social aspects to that conflict and similar conflicts, elsewhere in the world.

Madani expressed the readiness of OIC to help alleviate the hardship being experienced by communities affected by the activities of the insurgents.

He said that though OIC was a political and not a religious organisation it is prepared to assist the country in convening inter-faith dialogue, based on the request of Nigeria.

He said that such inter-faith dialogue would help in promoting unity and religious tolerance among Nigerians.

According to him, the 57-member organisation of which Nigeria is a member, has already issued strong statements condemning the activities of Boko Haram and urged Muslims to shun them.

Minister of Foreign Affairs, Ambassador Aminu Wali, who accompanied the delegation from OIC, expressed Nigeria’s appreciation for the support, saying that it had shown that the organisation was always willing to come to the aid of member states.

“The fact that OIC has expressed its position of support and understanding in this area of our challenges, goes to show that it is playing its role to support any of its member states that has any problem – socially, economically, religiously, or otherwise.

The minister stated that Nigeria had requested assistance from OIC for the rehabilitation of displaced communities from the Boko Haram-ravaged areas.

“”As a member of the OIC, Nigeria will certainly look forward for support from the OIC for those that have been internally displaced,” he said.