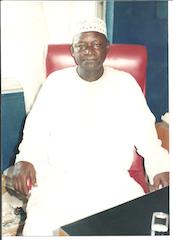 Alhaji Ganiyu Akanbi, business man and a Yoruba leader in Kano, northwest Nigeria was assassinated in his Race Course residence at the early hours of Thursday, P.M.NEWS gathered.

The 86-year-old owner of Criss Cross Hotel and Criss Cross Oil was before his death, the grand patron of the Yoruba community in Kano.

Family and security sources said he was stabbed to death at his residence by yet to be identified assassins.

The late Alhaji Bello who has spent close to four decades in Kano was a socialite and philanthropist.

He hailed from Ibadan, Oyo State, Southwest Nigeria, “he considered Kano as his second home and was very popular within the Race Course area, where he was attacked and hacked to death by yet to be identified persons,” one of his aides told P.M.NEWS.

His death has thrown his immediate household and the entire Yoruba community in the metropolis to a mourning mood.

Soon after his gruesome murder, the incident was promptly reported to the police, who immediately dispatched detectives to the scene to conduct forensic investigation and take samples of finger prints, so to track down the perpetrators of the crime.

However, no fewer than five employees of Centre for Excellence, a hospitality outfit owned by the deceased have been invited for interrogation by security agents, so as to assist the law enforcement agencies on their investigation.

He has since been buried in his residence on Race Course road, according to Muslim rites.

One his son, identified as Alhaji Nurudeen Bello, described the untimely death of his father as unfortunate and cruel, adding that Allah in His infinite mercy will expose the assassins.
Commenting on his death, the president of the Yoruba community in Kano, Dr Suara Adesokan believes that the Almighty Allah will expose his killers, insisting that they have murdered sleep and would sleep no more.