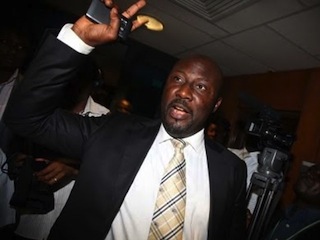 The executive secretary of Anti-Corruption Network, ACN, Dino Melaye, has attacked the President Goodluck Jonathan, saying he is the most corrupt in the history of the nation.

The former House of Representatives member made the statement at an Anti-Corruption Public Symposium held at the Julius Berger Hall of the University of Lagos, by members of Gani Fawehinmi Students’ Chambers, Faculty of Law, Akoka, Lagos, southwest Nigeria.

Melaye said the present administration was romancing corruption at the expense of development, stating that the level of corruption in the country is more worrisome compared to the ravaging Boko Haram crisis.

“And I am saying that without fear or favour. Since Jonathan became the president, not one single politically exposed person has been prosecuted or jailed, not even those who refunded the subsidy stolen money. Once you refund money, it is an admittance of guilt,” Melaye said.

“When I was a member of House of Reps in 2011, we passed a budget of N245 billion for subsidy. This reckless and irresponsible government ended up spending N2.3 trillion, over N2 trillion outside appropriation. In any civilized country in the world, it is either the president resigns or is impeached for this act.”

“What we are practicing is not democracy but greediocracy. It is government of the greedy, by the greedy and for the greedy. Corruption is the bane of our development as a nation,” he stated.

He noted that there is corruption in the executive, judiciary, legislature and the Civil Service.

Noting that while all those involved in the Haliburton bribery scandal have been jailed abroad, their accomplices in Nigeria are walking free.

“Don’t be afraid for me, if I am arrested, I have my toothpaste and soap here. If I am arrested I would only justify the reason why cells were built. What I am saying in essence is that corruption is thriving because the majority of Nigerians are gullible and not concerned about governance.”

He noted that the gap between the rich and the poor is widening per second and the middle class has been completely eroded.

The Head of Chambers of Gani Fawehinmi Students’ Chambers, Lord Henry Ikwunemere, in his speech said it is unfortunate that in spite of the efforts and sacrifices of Chief Gani Fawehinmi and others like him in fighting corruption, injustice and bad governance still pervade the country today.

Other guests at the event were Professor Akin Ibidapo-Obe who was the chairman of the occasion, Comrade Debo Adeniran of Coalition Against Corrupt Leaders, CACOL, former chairman of Nigerian Bar Association, Ikeja Branch, Barrister Monday Ubani, Barrister Emeka Agunwoye amongst others.