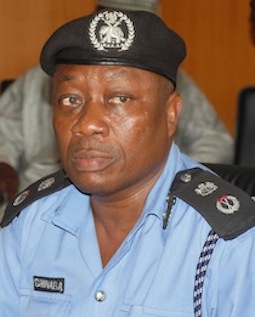 Adenrele Shinaba, Commissioner of Police in Kano, northwest Nigeria told journalists Thursday afternoon that the police have arrested some of the perpetrators of the 18 March, 2013 multiple bomb blasts that killed dozens of people and destroyed five luxury buses at the New Road Luxury Motor Park in Sabon Gari area of the city.

Shinaba said efforts are being made to make more arrests.

According to him, the police have made a breakthrough in their investigation of the blasts.

“If you recall, last year, there were multiple bomb blasts at New Road Park, Sabon Gari, Kano. The Command has achieved a breakthrough. Some suspects are in custody and some exhibits have been recovered.

“Investigation is in top gear. After that, we will be able to furnish you with our discoveries. We shall get to the root of the matter. We won’t rest on our oars to unravel the circumstances surrounding the dastardly act,” Shinaba told journalists at the police headquarters in Bompai.

The Kano police boss disclosed further that in a joint operation with the agents of the Department of State Services (DSS) and soldiers, improvised explosive devices (IEDs) were impounded at Medile Quarters in Kumbotso Local Government Area, Kano.

But for the expertise displayed by the police anti-bomb squad, Shinaba said the explosives which were already primed would have killed the security men that went on the raid and Kano city would have been devastated.

“But all the IEDs were promptly and safely defused by the police anti-bomb squad,” he added.

He also disclosed that his men in the early hours of Thursday foiled plans by hoodlums to vandalize the MTN facility at Bebeji area of the state where criminals at about 2:30 a.m. successfully removed 39 batteries concealed inside tomato baskets.

Shinaba revealed that the tools used to break into the facility and a J5 Peugeot car were recovered. The suspects, however, escaped on sighting the police.

The police boss disclosed further that his men arrested three car snatchers and recovered six vehicles and a tricycle, adding that the suspects were being interrogated with a view to arresting the fleeing gang members.

“Based on information, a combined team of the police special anti-robbery squad and the Ali Kwara Vigilante team on patrol along Zaria Road pursued a Toyota Camry with registration number FH 449 ABC with two occupants.

“The occupants opened fire and were chased. They abandoned the car and ran into a nearby bush with injuries. On a search, 20 live ammunition of AK 47, 7.62mm were recovered, but no arrest was made,” Shinaba stated.

“The raid of black spots in Kano will continue, we are not sleeping. Following the raids, incidences like armed robbery and rape have reduced drastically. We are doing all we can to secure lives and property by adopting proactive measures for the citizens to live in peace,” Shinaba added.

He enjoined the public “to continue praying at mosques, churches and other places of gathering for the continued peace and progress of the state and the nation, in general.