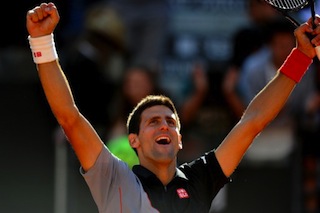 Victory on Sunday would make Djokovic only the eighth man in history to complete the career Grand Slam.

“I played really well in the first two sets with great concentration, but the hot conditions were very tough for both of us,” said six-time major winner Djokovic.

“I am always motivated to play well at Roland Garros. I need to push my body to the maximum as it’s hard to predict what will happen.”

Playing in his 22nd semi-final at a major compared to a debut appearance for Gulbis, the Serb was hardly troubled in the first two sets on a sweltering afternoon in the French capital.

But Gulbis, the 18th seed who defeated 17-time major winner Roger Federer and sixth seed Tomas Berdych to get to his first Grand Slam semi-final, rallied in the third to briefly breathe life into the contest.

In the end, however, Gulbis’s 44 unforced errors to Djokovic’s 25, as well as his ability to convert just two of his seven break points proved crucial.

Gulbis was made to regret squandering break points in the fourth game of the first set as Djokovic pounced in the next and claimed the opener on a third set point in the ninth game.

The crucial point summed up the 41-minute set as the Serb illustrated why he is regarded as the game’s best returner, his early backhand putting Gulbis on the back foot and off balance with the Latvian unable to regain his poise.

Gulbis fired twice as many unforced errors in the opener, the heat and bright conditions making the ball fly.

Watched by a host of former champions including Bjorn Borg and Gustavo Kuerten, Gulbis hit a lazy backhand long and was broken to trail 3-4 in the second set.

Djokovic claimed a double break and the second set in the ninth game as Gulbis’s afternoon went from bad to worse with his error count moving to 28 against 12.

The more experienced and far steadier Djokovic saved a break point again in the second game of the third set and two more in the sixth.

But Gulbis, buoyed by a run of form that many in the sport thought was beyond this son of one of Latvia’s richest men, finally broke at the sixth attempt for 5-3 and secured the third set with his 11th ace, fired down the ‘T’ at 210km/h.

Suddenly, the semi-final burst into life.

Djokovic broke to lead 2-0 in the fourth set but handed it back in the third game, a lapse which prompted a racquet smash into the Paris dirt followed by a code violation.

But he regained his composure with what proved to be the critical break in the eighth game of the set and when a fatigued Gulbis failed to get any serious purchase on a raking Djokovic forehand the contest was over.