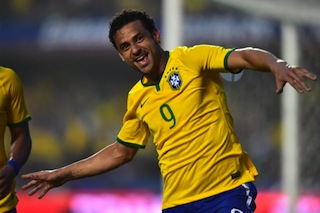 Fred celebrates after scoring for Brazil against Serbia

A second-half goal from centre-forward Fred secured a 1-0 win for Brazil over Serbia in Sao Paulo on Friday in their final warm-up ahead of next week’s World Cup opener with Croatia.

Fred poked home the decisive goal of a cagey encounter at the Morumbi stadium to give Luiz Felipe Scolari’s side a winning send-off ahead of next week’s match across the city at the new Corinthians Arena.

A crowd of 67,042 saw Fluminense striker Fred slide an effort home despite being grounded after a challenge to end stubborn resistence by the Serbians, who kept Brazil starlet Neymar in check throughout.

Sao Paulo crowds have often been demanding of Brazil sides — and the team generally gives the city a wide berth.

After an unconvincing opening half some of the fans let their impatience be known.

But skipper Thiago Silva’s raking pass enabled Fred to show his predatory qualities as he latched onto a deep cross after taking the ball on his chest, and stabbing home.

Dortmund’s Milos Jojic almost bagged an equalizer but his header 18 minutes from the end struck the woodwork.