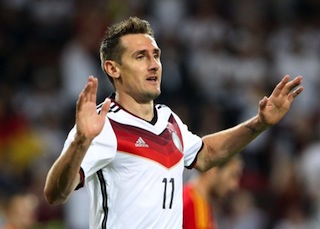 Veteran striker Miroslav Klose became Germany’s all-time top-scorer on Friday when he netted his 69th goal in his 132nd appearance in their 6-1 friendly romp against Armenia.

The hot-shot, who turns 36 on Monday, came off the bench to head Germany’s fourth goal as they scored five goals in the final 16 minutes in their last World Cup warm-up match.

Klose bettered the previous record set by Gerd Mueller, who scored the winner in the 1974 World Cup final to claim his 68th goal in 62 appearances for West Germany.

“Of course, that means a lot to me, but more important was to be in form,” said Klose, who has had an injury-ravaged season with Lazio.

As the only recognised striker in the Germany squad, Klose can claim more records in Brazil where he is just one short of Ronaldo’s record of 15 goals in World Cup finals.

Germany open their Group G campaign against Portugal in Salvador on June 16 and also face Ghana and the USA in the first round.