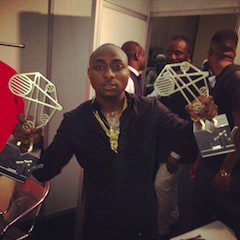 Nigeria’s music star, Davido has been adjudged the Artiste of the year at the 2014 MTV Africa Music Awards, MAMAs, held on Saturday 7 June.

Clarence, son of award-winning actress, Clarion Chukwurah, also made Nigeria proud as he was honoured with the newly introduced ‘Transform Today Award’ By Absolut.

Contemporary Highlife singer, Flavour N’abania also earned himself a diadem. He was bestowed the Best Live Act award to take the total haul for Nigeria to six.

South Africa duo and quadruple nominees Mafikizolo triumphed in the Best Group and Song of The Year categories with monster hit, ‘Khona’.

Their counterparts, Goldfish won the best Pop award, Gangs of Ballet picked the Best Alternative statuette and Uhuru was recognised for Best Collaboration for his part in “Y-tjukutja” by Uhuru Ft. Oskido, DJ Bucks, Professor and Yuri Da Cunha. 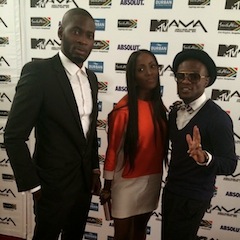 In this year’s newly introduced lifestyle award categories, Kenyan actress Lupita Nyong’o took home the award for Personality of the Year, while the inaugural MTV Base Leadership award was won by Tanzanian entrepreneur Ashish J. Thakkar.

All the artistes then performed on stage for a medley of French Montana songs including “Pop That”, “Freaks” and “Ain’t Worried About Nothin!”

American stand-up comic, film and television sensation Marlon Wayans hosted MAMA 2014 with his trademark humour, making a triumphant entrance on a blinged-up rickshaw and engaging the audience with his easy charm.

Desmond Golding, Head of Department of Economic Development & Tourism, KZN Province, “The MAMAs 2014 has fulfilled all its great promise in terms of spectacle, star power and bringing the eyes of the world onto our great province.

“We congratulate the winners, nominees and performers on a truly spectacular evening of entertainment. Through cultural events of this magnitude, we underline the stature of KwaZulu-Natal as a leading destination for tourism, economic development and cultural experiences.”

The 2014 MTV Africa Music Awards is a stunning pan-African celebration of music, youth culture and lifestyle, sponsored by KwaZulu-Natal Province and supported by Absolut and the City of Durban.

South Africa Tourism is also a key partner to the awards.