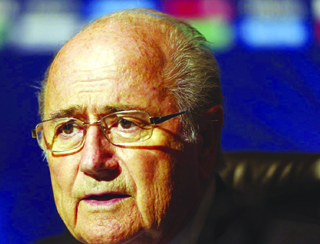 FIFA Sepp Blatter hit back at critics of football’s governing body ahead of its annual congress Tuesday claiming that racism is behind corruption accusations against Qatar’s 2022 World Cup bid.

The accusations that Qatar paid for votes when FIFA chose Qatar in 2020 will be discussed at the two-day Congress, the embattled 78-year-old Swiss official said.

The growing scandal has threatened to taint the opening of the latest World Cup in Sao Paulo on Thursday.

FIFA faces mounting pressure as five of its six major sponsors have called for a thorough investgation of the allegations largely made by the British media.

Blatter, who is set to tell the Congress that he will stand for a fifth four-year term, told a meeting of the African Football Confederation (CAF) that there were sinister motivations behind the campaign.

Blatter hit out at the “storm against FIFA” over the 2022 World Cup and the “discrimination and racism” at the heart of the attacks. He said the allegations “really make me sad”.

CAF members — who along with their long-time president Issa Hayatou have been accused in British media of accepting Qatar’s money — gave Blatter a rousing reception and also slammed the allegations.

“(CAF) condemns the strategy of using African sport movements and its leaders as scapegoats by those who are trying, at all costs, to acquire a good conscience for themselves,” it said in a statement.

CAF “expresses its gratitude to FIFA president Mr Joseph S Blatter, for his continuous involenment in the development of football in Africa and his personal commitment in the fight against racism.”

Blatter was equally defiant at the Asian Football Confederation adding that “I still have the fire inside” to lead FIFA.

Blatter’s attack on the corruption charges echoed those of Asia’s top Olympic official Kuwaiti Sheikh Ahmad al-Sabah, who said last week that the allegations were a racist attack on Arabs.

“We will confront all such acts of racism and we will stand with Qatar so that no-one removes its right to organise the 2022 World Cup in Doha,” said the Sheikh, president of the Olympic Council of Asia and a highly-influential figure within the International Olympic Committee (IOC).

Qatar beat the United States, Australia, Japan and South Korea to the 2022 tournament, despite a FIFA technical report which warned the searing temperatures during June and July in Qatar posed a health risk.

Amid calls for a re-vote, FIFA investigator Michael Garcia was to finish his inquiry into the 2022 vote and the 2018 bid contest, won by Russia, on Monday.

Garcia is to speak at the Congress about his work, but his report will not be handed over to the FIFA adjudicatory chamber until mid-July, when the World Cup final is held.

Blatter said Monday that he expected the FIFA Ethics Committee to decide what, if any, action to take over Garcia’s report in three to four months time.

“I hope it will be in September or October,” he told AFC officials.

The crisis surrounding FIFA couldn’t have come at a worse time as the problem-plagued preparations for the 2016 finals nears its opening test with hosts Brazil playing Croatia in Sao Paulo on Thursday.

A huge cloud is hanging over that match as subway workers have threatened to resume a damaging strike on Thursday, the day the world’s eyes turn to the Brazilian mega-city for the start of a World Cup whose build-up has been plagued by delays, overspending and protests.

The workers voted Monday to suspend their five-day-old strike, which had caused massive traffic jams and cut off subway service to Corinthians Arena, the stadium hosting the opening ceremony and kick-off.

Officials are hard-pressed to avoid more problems as a billion people worldwide tune in to the game on TV.

UN Secretary General Ban Ki-moon and 12 heads of state and government will be in the stadium, which workers are rushing to finish on time.

On the footballing front Portugal will round off their preparations with a friendly against the Republic of Ireland later on Tuesday with question marks still surrounding the fitness of their pivotal player Ballon d’Or holder Cristiano Ronaldo.