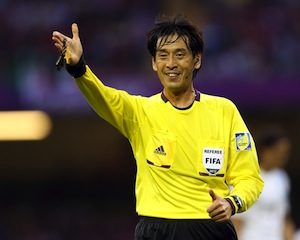 Japanese referee Yuichi Nishimura will have the honour of refereeing the opening game of the World Cup finals between hosts Brazil and Croatia, FIFA announced on Tuesday.

The 42-year old who was named Asian Football Confederations’ referee of the year in 2012 will be assisted by compatriots Toru Sagara and Toshiyuki Nagi, with Alireza Faghani of Iran designated as the fourth official.

Having been in charge of four games in 2010, including the quarter-final encounter between the Netherlands and Brazil, Nishimura becomes the third Japanese referee to have officiated at two World Cup finals after Shizuo Takada (1986 and 1990) and Toru Kamikawa (2002 and 2006).

Since making his international refereeing debut in 2004, Nishimura has been assigned to numerous other finals tournaments with his most important games the Under-17 World Cup 2007 final between Spain and Nigeria, and the Club World Cup 2010 final between Democratic Republic of Congo outfit TP Mazembe and Italian giants Inter Milan.