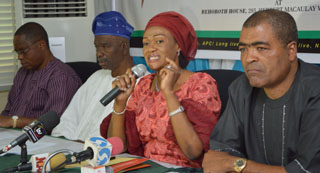 Senator Oluremi Tinubu representing Lagos Central Senatorial District at the National Assembly, recently gave an account of her activities in the Senate in the last three years before the media and members of her constituency.

The bills include the National Social Security Agency Bill, 2011; a Bill for an Act to Amend the Labour Act, 2004, and for other matters; and the Lagos State Special Economic Assistance Bill, 2013, which has passed through the first reading.

Senator Tinubu said she sponsored the Motion on Flood Disaster in Lagos and the motion on the urgent need to investigate the imminent collapse of the Third Mainland Bridge, Lagos.

She listed Lagos Central Constituency projects captured in the budget to include the on-going construction of a N222.3 million Drug Rehabilitation and Counselling Centre at Gedegede, Eti Osa; the construction of N223 million ultra-modern market in Oke Ira, Eti-Osa and a N220 million model primary school at Takwa Bay in Iru/Victoria Island Council.

Mrs. Tinubu said as a member of the Senate Committee on Education, she secured intervention funds through the Tertiary Education Trust Fund (TETFUND) for tertiary institutions in Lagos State.

These include N160 million for the construction of a 1,200-seater auditorium at Adeniran Ogunsanya College of Education, Ijanikin; N109 million intervention for Michael Otedola College of Primary Education (MOCPED), Noforija, Epe; and N108 million for the Lagos State University (LASU), Ojo.

Senator Tinubu reflected on the Lagos Constituency Development and Empowerment Initiative sponsored by her in the last three years, saying she had ploughed back to the constituency.

She said: Since the Post-Secondary School Scholarship Scheme (PSSS) was launched, 26 beneficiaries of four-year scholarships receive a N100,000 annually to support their education. The selection was made from 650 candidates. The remaining 624 applicants were given a one off N10,000 each to buy books.

“Before the commencement of each academic year, I meet the 26 students in an interactive mentoring session. They also attend leadership training at the New Era Youth Camp (NEYOCA) in Kayetoro, Ibeju Lekki.

“We launched the Petty Traders Empowerment Capital Scheme (PETECS) and 650 beneficiaries were given N20,000 each to enhance their trades or businesses. The sponsorship of Senator Muniru Muse Under-12 boys and Under-15 girls was in continuation of a tournament introduced by my predecessor. We have hosted and sponsored three tournaments since I assumed office as a senator,”she added.

“The Youth Empowerment and Skills Acquisition Scheme (YESAS) was initiated, under which 164 youths were trained in various vocational skills by experienced instructors (during three days and five days training programmes). A start-up kit worth N10,000 was given to each of them and N40,000 was also given to them in two installments.

“Under the Good Boys and Good Girls Empowerment Scheme (GBGES), N100,000 start-up capital was provided for 80 beneficiaries drawn from various parts of the state. This programme was introduced to give a second chance to unemployed and idle youths. Due to more pressure from those from my Senatorial District, another set of 11 beneficiaries were added to the list.”