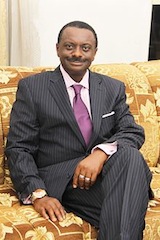 Adejumo made the promise at the “Aspirants’ Forum” of the Oyo NUJ Correspondents Chapel in Ibadan.

The former Chairman of the State Universal Basic Education Board (SUBEB) during the Adebayo Alao-Akala administration said the state had the resources to harness its agricultural, industrial and economic potentials.

“Oyo has 28,700 kilometres of cultivable farmland and there is no reason why the state could not be turned into the food basket of the nation,” he said.

He said the current administration in the state with the resources at his disposal should be able to embark on more initiatives than road expansion and urban renewal projects.

“There is also the need for accountability in the running of the state. How do you justify a situation whereby the government spent over N3 billion to construct the Mokola Fly-Over Bridge?

“Also, I don’t see any reason why Ajimobi’s government would destroy people’s investments in the name of beautification without providing an alternative means of livelihood for them,” he said.

He, however, commended the state government for constructing some roads and expanding others.

Adejumo expressed optimism that the factions in the state’s PDP would resolve to work together ahead of the 2015 general elections.

He also said he had intimated his former boss, Adebayo Alao-Akala, of his plans to contest the governorship election in 2015.

“At this stage of my life, I will never be an errand boy to any opponent.

“Alao-Akala and all of us running are qualified, so there is no way I will sacrifice my ambition for anybody. We all have the right to run for the office,” he said.