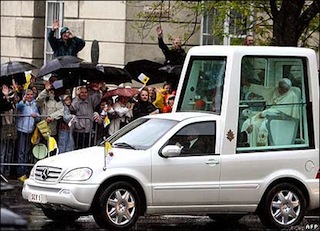 Pope Francis admitted in an interview Friday that he takes a risk when he ditches a “sardine can” popemobile to greet the people, but at his age he has little to lose.

The 77-year old pontiff recalled that for his July 2013 visit to Brazil officials had prepared a glass-enclosed “popemobile” to shield him.

“But I cannot greet the people and tell them I love them inside a sardine can, even if it is glass,” he said in an interview with the Barcelona-based Vanguardia newspaper.

“For me it is a wall,” said the spiritual leader of the world’s 1.2 billion Roman Catholics.

“It is true something could happen to me but let’s be realistic, at my age I do not have much to lose,” he told the paper’s Vatican correspondent Henrique Cymerman.

Francis has preferred to use open-top cars in contrast to his predecessor Benedict XVI who rode in a bulletproof “popemobile” — a novelty introduced after the attempted assassination of John Paul II in 1981.