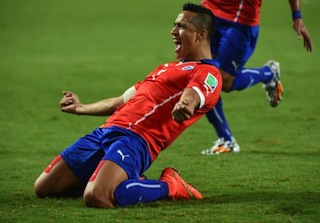 Alexis Sanchez helped Chile pile the pressure on world champions Spain after a 3-1 win over Australia in their World Cup opener in Cuiaba saw them join the Netherlands on top of Group B.

Sanchez set Chile on their way early on, the Barcelona star turning provider 70 seconds later to set up Jorge Valdivia.

Tim Cahill pulled one back before half-time with Wigan Athletic’s Jean Beausejour grabbing a third for Chile in injury time of a pulsating encounter under the Arena Pantanal’s floodlights.

But following Spain’s 5-1 rout by the Dutch earlier in Salvador, the reigning champions almost certainly must beat Chile in Rio on June 18th to avoid an ignominious early exit.

“I’m very disappointed, I thought we could get something out of this game.

“But Chile began strongly, their two goals made life difficult. For much of the second half we were on top.”

His opposite number Jorge Sampaoli praised Sanchez’s match-winning contribution, and conceded that with Spain looming his side would need to build on this performance.

“Alexis of course is always a plus for us, I’m glad to know he can perform.

“There were positives for us here but Spain have a superlative history, and we will definitely have to be able to perform better than we did today when we play them.”

Chile thought they’d done enough to snuff out the Socceroos in the time it takes to make a pisco sour.

The 12th-minute opener came after sterling work by Charles Aranguiz in the Australia box, the midfielder’s efforts resulting in the ball landing at Sanchez’s feet, spelling danger for an Australian defence all at sea.

The prolific striker did not let the opportunity slip, clipping the ball right-footed past keeper Mat Ryan.

Among those celebrating in the 20,000-strong Chilean support were Manchester City manager Manuel Pellegrini, and the country’s president Michelle Bachelet.

Sanchez set up the second, feeding the ball to an unmarked Valdivia whose sweetly struck shot from the edge of the box sailed over the helpless Ryan’s head.

The perfect start then for a Chile side that arrived in Brazil with huge ambitions to make a real impact for the first time since finishing third on home soil in 1962.

After that frenetic opening to the game, played in stifling 30 degree heat despite the evening kick-off, entered a quiet phase as Ange Postecoglou’s bunch of largely untested youngsters tried to regroup.

If Australia were going to get back into the game it was going to take some magic from veteran Cahill, the country’s all-time top scorer. And the New York Red Bulls striker duly obliged, outjumping his marker, Cardiff city’s Gary Medel, to head past Chile captain Claudio Bravo in the 35th minute.

Cahill, sent off in Australia’s first match four years ago in South Africa, wasn’t a million miles away from a quick second, his shot at half-time beckoned only denied by the shins of Bravo.

Pellegrini would no doubt have given anything to descend from his commentary box and impart a word or two of advice to his 11 countrymen at the interval.

Chile, buoyed by Arturo Vidal’s return to fitness after a knee problem, faced a serious task at the restart to reassert their early domination against a reinvigorated Australia.

But soon after, Bravo was picking the ball out of the back of his net, only for Cahill’s effort to be justifiably disallowed for offside.

Felipe Gutierrez replaced Vidal on the hour, as Aussie defender Alex Wilkinson performed heroics to stop Eduardo Vargas’s shot, which had nipped past Ryan, from crossing an empty goal line.

As the stifling conditions took their toll, second half substitute Beausejour sealed Australia’s fate as Chile joined the Dutch at the top of Group B.