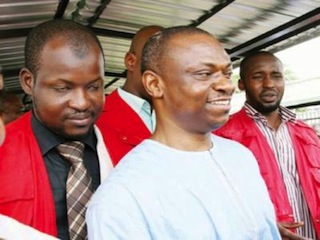 A Federal High Court in Lagos on Tuesday fixed 30 September for ruling on practice direction in the trial of Francis Atuche and Charles Ojo charged with N125 billion fraud.

Justice Saliu Saidu adjourned the case for ruling after the prosecution and the defence counsel had adopted their written addresses on the issue of practice direction.

Adopting his address, defence counsel, Chief Anthony Idigbe (SAN), argued that the practice direction was made pursuant to the provisions of the Criminal Procedure Act (CPA).

He argued that practice direction was inapplicable to the instant case since the prosecution cannot force the defence to disclose its case even before the commencement of trial.

He, therefore, urged the court not to rely on practice direction as proffered by prosecution, adding that the power of the Chief Judge of the Federal High Court was limited by Section 4 of the CPA.

In his submission, Kemi Pinheiro (SAN), the prosecutor, argued that the practice direction did not derogate from the provisions of the constitution.

He noted that Section 254 of the 1999 Constitution empowered the chief judge of the Federal High Court to make the rules of practice direction as enacted.

According to Pinheiro, the defence must clearly show any law which precludes the Chief Judge from making the rules of practice direction.

He added that the basis was to enhance speedy disposal of cases.

The prosecution said the CPA shall not be the only procedural legislation to guide the conduct of criminal proceedings as it would hinder the modification of situations.

After listening to the submissions of the two counsel, Saidu reserved ruling till 30 September.

NAN reports that the accused were re-arraigned before Saidu on 20 February on the amended charges.

At their re-arraignment, the two ex-bank chiefs pleaded not guilty to the charges.

Saidu, however, allowed the accused to continue with the earlier bail granted them by previous judges.

After their re-arraignment, the prosecutor had applied for a date for further mention of the case, adding that in line with the new practice direction of court, the prosecution was duty bound to ensure speedy trial.

The defence counsel had, however, opposed the submission of the prosecution, saying practice direction is not applicable in the present case.

Saidu adjourned the case for both parties to address the court on the necessity of applying practice direction in the suit.

NAN reports that the accused were first arraigned in 2009 before Justice Akinjide Ajakaiye.

Ajakaiye had granted them bail in the sum of N50 million each with two sureties each in like sum.

They were later re-arraigned before Justice Binta Murtala-Nyako on 3 February 2012 and subsequently, before Justice Rita Ofili-Ajumogobia on 16 Janua 2013.

Both judges had adopted the bail terms earlier granted by Ajakaiye.

In the charge, the accused were alleged to have granted credit facilities, manipulated shares and committed general banking fraud to the tune of over N125 billion.

The offences contravened the provisions of Sections 7(2), (b) of the Advanced Fee Fraud Act, 2004, and Sections 15 (1) of the Failed Banks (Recovery of Debts) and Financial Malpractices in Banks Act, 2004.

The offences also contravened the provisions of Section 516 of the Criminal Code Act, Laws of the Federation, 2004 and Section 14 (1) of the Money Laundering Prohibition Act, 2004.