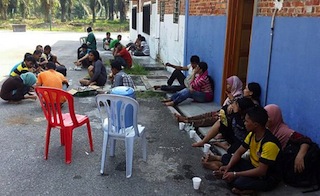 Nine people were missing after an Indonesia-bound boat sank off western Malaysia early Thursday, a report said, as authorities searched for 26 passengers unaccounted for after a similar incident a day earlier.

The boat, believed bound for the Indonesian island of Sumatra across the busy Malacca Strait, sank off Malaysia’s coast near the district of Sepang, south of the capital Kuala Lumpur, The Star newspaper quoted an official as saying.

“Initial investigations revealed that the boat sank at about 3 am (1900 GMT Wednesday) bound for Tanjung Balai (in Sumatra),” Mohamad Hambali Yaakup, an official with the Malaysian Maritime Enforcement Agency (MMEA), was quoted as saying.

He said 18 people had been rescued. There was no mention of any bodies found.

Another boat carrying 97 people sank early Wednesday just up the Malaysian coast from the site of the latest accident.

Nine bodies have been recovered from the earlier sinking. Authorities were still looking for 26 people missing from that accident.