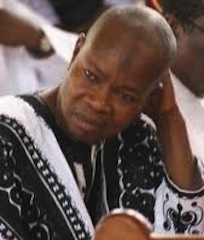 The late Arisekola Alao, who held the Aare Musulumi of Yoruba land title for 34 years before he died in 2014

The Oyo State Government has declared seven days of mourning following the death of Alhaji AbdulAzeez Arisekola-Alao in the UK on Wednesday.

Dr Festus Adedayo, the Senior Special Adviser on Media to Gov. Abiola Ajimobi of Oyo State, made the disclosure late night on Wednesday in Ibadan.

“The state government has also declared Friday 20 June 2014 a public holiday, as mark of respect for the spirit of the departed soul.”

Governor Abiola Ajimobi had earlier on Wednesday visited the Ibadan home of the deceased.

Meanwhile, the state government had sent a special delegation comprising the Speaker of the State House of Assembly, Alhaj Monsurat Sunmonu, the Secretary to the State Government, Olalekan Alli and two other members of the Executive to London.

The delegation was to accompany the remains of Arisekola-Alao to Nigeria.