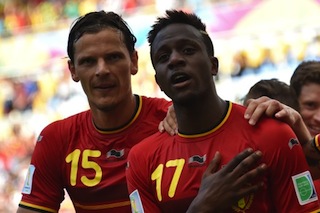 A late goal from Divock Origi fired Belgium into the last 16 of the World Cup here Sunday with a 1-0 win over Russia, whose fate is hanging in the balance.

The win sees tournament dark horses Belgium guaranteed of a place in the second round ahead of their final group game against South Korea on Thursday.

But the defeat leaves Fabio Capello’s Russia facing a tense battle to qualify, with only one point from two games.

Algeria or South Korea can thrust themselves into pole position to join Belgium in the second round with victory in their match in Porto Alegre later Sunday, which kicks off at 4pm (1900 GMT).

Elsewhere Sunday, Ronaldo and Portugal will be battling to stay in the competition when they face the United States in the Amazon city of Manaus.

A disastrous 4-0 thrashing by Germany in their opening Group G match has plunged Portugal into crisis as they prepare to face the Americans, surprise 2-1 winners over Ghana in their first game.

Portugal’s preparations for a match they cannot afford to lose have been disrupted by a suspension to defender Pepe and a tournament-ending injury to Real Madrid’s Fabio Coentrao.

“The situation is very simple: either we win or we start to pack our bags,” Portugal coach Paulo Bento said.

“It is not a scenario that the Portuguese are used to,” he added.

US coach Jurgen Klinsmann will be without striker Jozy Altidore, who has a hamstring injury. Clint Dempsey, who scored the first goal against Ghana, is likely to wear a protective face mask after breaking his nose in the first game.

More European teams are battling against the possibility of an early exit as the group phase reaches its climax later this week.

Italy captain and goalkeeper Gianluigi Buffon said Sunday his team must raise their game after a shock 1-0 defeat to Costa Rica on Friday in Group D.

The Italians play Uruguay on Tuesday desperate to avoid a repeat of 2010, when they bowed out at the group stage.

“We need to show some strength and pride and come up with a win. We need cool heads but also to be highly motivated,” Buffon said. “If we end up going out in the first round, it will be a failure.”

Van Gaal’s Netherlands have already qualified for the last 16 and face Chile tomorrow to determine which side finishes top of Group B.

But van Gaal has criticised scheduling which will see Brazil’s final Group A clash kick off after Group B has been concluded.

“FIFA after every match they have this publicity round, ‘Fair Play’ and things like that. Then FIFA plays these tricks — it’s not good, of course,” said Van Gaal.