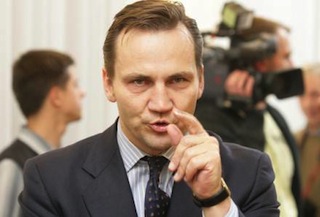 A Polish magazine said on Sunday it had secret audio recordings of the foreign minister blasting Warsaw’s ties with the US as “worthless”, the latest leak in a bugging scandal that has rocked the government.

The Wprost news magazine set off a political storm last week when it released audio suggesting the government had cut a deal with the central bank to boost the budget and garner political support.

“It’s harmful even, because it gives Poland a false sense of security,” he adds according to a transcript published on Wprost’s website.

“Complete bullshit! We’ll enter into conflict with Germany, with Russia, and we’ll think everything is fine because we gave the Americans a blow job. Suckers. Complete suckers.”

Sikorski’s name has come up as a possible successor to Catherine Ashton, whose term as European Union foreign policy chief ends this year.

Wprost said the conversation took place earlier this year at an exclusive Warsaw restaurant but did not say who recorded the talks.

Government spokeswoman Malgorzata Kidawa-Blonska refused to comment on the report, saying she prefered to wait until the full transcript was released. Wprost said it would do so on Monday.

The magazine first set off a political crisis last Sunday when it released audio purportedly of the central bank chief telling the interior minister he would support the government’s economic policy if Rostowski — then finance minister — resigned.

Days after Wprost posted the audio, government agents raided its offices and tried to wrestle a laptop out of the editor-in-chief’s arms — a scene that raised alarm at home and abroad over press freedom.

The bugging scandal has set off a massive political crisis and called into question the centre-right government’s future.

Prime Minister Donald Tusk has rejected calls to quit from the opposition but has floated the possibility of snap elections before the regularly scheduled vote late next year.