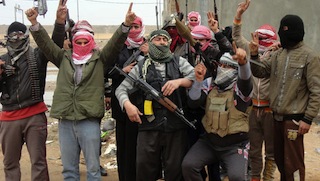 Sixty-nine detainees were killed in a militant attack on an Iraqi convoy transporting them in an area south of Baghdad on Monday, officials said.

One policeman and eight gunmen were also killed in clashes that erupted during the attack in the Hashimiyah area of Babil province, according to a police captain and a doctor. It was not immediately clear how the detainees died.

It is the second instance of a large number of detainees being killed since the start of a militant offensive on June 9 that has overrun major areas of five different provinces.

At least 44 prisoners were killed during a militant assault on a prison in the city of Baquba last week.

Accounts differed as to who was responsible for the Baquba killings, with Prime Minister Nuri al-Maliki’s security spokesman saying the prisoners were killed by insurgents carrying out the attack, and other officials saying they were killed by security forces as they tried to escape.