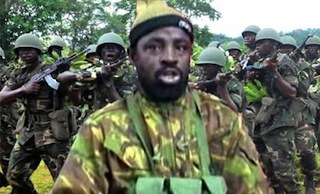 A suicide bomber on Sunday rammed his car into a military checkpoint in northeast Nigeria’s Borno state near the border with Cameroon killing three soldiers in an attack blamed on Boko Haram Islamists, residents said.

Three other soldiers were also injured in the early morning attack in Gwoza town, a resident, Dahiru Yunusa, told AFP.

“It was a suicide attack by a man believed to be a Boko Haram (member) who drove his car into the checkpoint and killed three soldiers,” Yunusa said. “The huge blast which was heard throughout the town.”

The attack in Gwoza, 100 kilometres (60 miles) from state capital Maiduguri, happened when the bomber rammed his explosives-laden car into the checkpoint outside a secondary school in the town that has come under repeated attack by the insurgents, leaving dozens dead.

It occurred around 7:00 am (0600 GMT) but the news of the incident took several hours to emerge due to the area’s poor telephone network following the destruction of telecom masts in previous Boko Haram attacks.

Musa Buzu, another resident who gave a similar account, said the military cordoned off the scene of the blast until 4:00 pm.

Residents thronged the scene to look at the mangled remains of the car used by the suicide bomber, Buzu said.

“The town was still asleep when the suicide bomber attacked the checkpoint with a deafening explosion that awoke the whole town,” he said.

Military spokesmen were not available to comment on the attack.

Last month, the traditional monarch of Gwoza, Idrissa Timta, was killed when Boko Haram gunmen ambushed the convoy of three emirs on their way to the funeral of another influential emir.