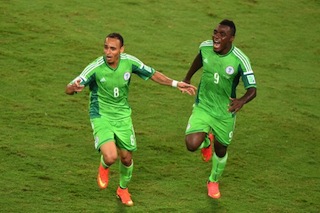 Osaze Odemwingie believes Nigeria can go all the way in the ongoing 2014 FIFA World Cup in Brazil provided the players play to their potential.

The 32-year-old, who scored the only goal of the game against Bosnia-Herzegovina in Cuiaba on Saturday, said that Nigeria has what it takes to make it to the final.

“I saw a Brazilian on the street who told me he foresaw Nigeria playing the final against Brazil and I said to myself why not, going by the level of our players and the fact that they are yet to peak,” Odemwingie said at the post-match press conference.

While revealing that the goal against Bosnia helped ease his disappointment at missing out on last year’s Nations Cup in South Africa, Odemwingie reiterated his confidence in the team, insisting that the squad is balanced in all departments.

“But mark my words we have a very resilient defence, a creative midfield and an attack force that can trouble any defence in the world if we play to our potentials we can go all the way,” he declared.

Meanwhile, Odemwingie has revealed that the intensity of Saturday’s win over Bosnia-Herzegovina made him forget he netted the winner in the contest.

Odemwingie struck unerringly from inside the box in the 29th minute to give the Super Eagles a priceless win over the Dragons at the Arena Pantanal, Cuiabá.

The Stoke City striker has now spoken about the intensity of the game which temporarily made him forget he’d scored the decisive goal in the game.

“It feels great and I even forgot I scored because the game was so intense. I was impressed by the hard work and the shift that our team put in today,” Odemwingie exclusively told supersport.com.

Odemwingie added that the win was achieved because the team showed great courage and the players were united on the pitch.

“This is what they call a team performance. Right from our goalkeeper, Vincent Enyeama who made so many great saves.

“They passed the ball brilliantly and showed great quality. The midfielders worked hard too. We did the right things and deserved our win,” he said.

Nigeria had 10 shots on target, a far cry from their total against Iran in their opening game when they only managed a paltry six against Team Melli.

Odemwingie reckons the more expansive display on Saturday was crucial in the African champions recording a win against the highly-rated Bosnia side.

“We had so many shots on target. This meant that we went forward well in our counter attacks. It was very difficult to secure these three points but that’s what you enjoy when you play as a team.

“It was a very special game and an even more special performance from the team,” he said.

Saturday’s goal was Odemwingie’s first in four years for the Super Eagles and he took the time to discuss the implications of the decisive strike.

“It was maybe the most emotional moment for me. It meant even more because I have been out of the team for over a year and a half.

“But to be honest, what was most important was the win for the team and not my goal. We are a family and that’s what we have shown against Bosnia.

“Hopefully, this will be the beginning of many more victories to come,” he said.

Nigeria’s next group game is against Argentina and it will be decided at Estádio José Pinheiro Borba, Porto Alegre, on Wednesday, 25 June.