Bosnia defeats Iran 3-1, as both teams bow out 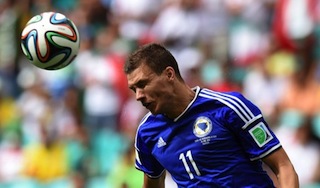 Goals from Edin Dzeko, Miralem Pjanic and Avdija Vrsajevic restored some pride after a hugely disappointing tournament for the Bosnians, whose elimination had already been confirmed following defeats to Argentina and Nigeria.

Iran, for whom Reza Ghoochannejad scored, needed to win the Group G game and hope Nigeria lost to Argentina in Porto Alegre, which they did 3-2, to maintain their hopes of reaching the last 16.