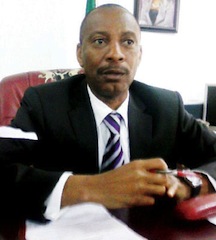 The crisis rocking Edo State House of Assembly degenerated to a ridiculous dimension this morning as the members held two parallel sessions in front of the main entrance gate of the assembly complex.

Apparently no longer comfortable with the heat emanating from the burning sun which the members had endured between Monday and Wednesday, they had decided to adjourn sitting, with the factions of All Progressives Congress, APC, and Peoples’ Democratic Party, PDP, adjourning sitting to two different days of next week.

Kabiru Adjoto of APC, who announced adjournment of his party’s faction, stated that the House would resume plenary on Monday next week.

He, however, cautioned security operatives at the Assembly against letting any lawmaker into the complex until sitting resumes.

The APC faction was presided over by the Speaker, Uyi Igbe.

The PDP faction, which which was presided over by the suspended Deputy Speaker, Festus Ebea, covered their heads with PDP customised umbrellas.

They spent about ten minutes deciding what to do about plenary.

Friday Ogieriakhi thereafter announced that they would resume sitting on Monday, 30 June, two days before plenary should resume, according to the speaker’s faction.