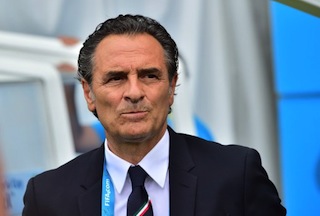 The post-mortem into Italy’s second consecutive World Cup humiliation was launched in scathing fashion by coach Cesare Prandelli, who has called for sweeping reforms to save the “disliked” Azzurri after resigning his post on Tuesday.

For the second successive edition, four-time champions Italy will not be playing a fourth match at the World Cup after a 1-0 defeat by Uruguay sent the South Americans through with Group D winners Costa Rica.

“I will not go back on my decision,” said the dapper 56-year old Italian coach, rebutting Abete’s claim he would try to change Prandelli’s mind.

The Azzurri are in turmoil, but Prandelli — who won wide support after steering the four-time champions to a runner-up place at Euro 2012 and third place in last year’s Confederations Cup — hinted the road back to global domination looks rocky.

He said there was work to do from grass roots level all the way to Serie A, where the “lack of collaboration” from those running the country’s elite league, as well as a general lack of support, was a hindrance.

“We have to rebuild from the bottom up, starting from the juniors we have to instill admiration for what the national team represents,” said Prandelli.

“There’s no hiding it, the national team is disliked.

“We’re the only national team that leaves (for the World Cup) without the support of its own people, who then rely on us to carry the hopes of a nation.

“We were jeered, whistled at and insulted. We were almost embarrassed to come here.”

Prandelli also took aim at Serie A stakeholders, who he claimed had given him little time to prepare the team for the World Cup.

“There’s no real collaboration. How can we prepare for a (friendly) game against Spain on a Wednesday, while there are two Serie A games being played on a Sunday night? Enough.”

Italy were widely expected to join Uruguay in the last 16, knockout round of the competition.

But following a 2-1 win over England in Manaus, where striker Mario Balotelli headed the winner after Daniel Sturridge had levelled Claudio Marchisio’s opener for the Azzurri, disaster struck in Recife.

Costa Rica had already signalled their threat with a tournament-opening 3-1 win over Uruguay, and stunned a lifeless Italy 1-0 to leave Prandelli’s men requiring a draw in Natal on Tuesday.

AC Milan striker Balotelli failed to shine in the opening half and after earning a yellow card for a needless kick to the head of Uruguay defender Alvaro Pereira, who plays for Inter, he was replaced at half-time.

A bigger blow was delivered when Marchisio was sent off after the restart and the Azzurri paid dearly when captain Diego Godin rose to head an 81st minute winner past Gianluigi Buffon.

Although the match will also be remembered for Luiz Suarez’s bite on Italy defender Giorgio Chiellini, Prandelli was more concerned by the Mexican referee Marco Rodriguez.

“You have to accept defeats, but when they are decided by wrong decisions it is hard to accept,” said Prandelli.

“It wasn’t a red card. It caused a downward spiral that changed the match and led to us being eliminated from the World Cup.”

Uruguay coach Oscar Tabarez could not believe his luck: “We’re very pleased, we didn’t imagine we would be sitting in this position right now.”

For the rest of the World Cup Prandelli and Italy will be left to wonder what might have been.

But, in keeping with the style that has been his trademark, the coach added: “I take all responsibility for our failure, which, among other things, is down to our limitations in quality.

“We knew it would have been difficult to match certain teams in what were testing playing conditions.

“When Uruguay had possession, they were fast and we just didn’t have that kind of speed.

“Maybe it worked with England, but it didn’t work with the two other teams.”