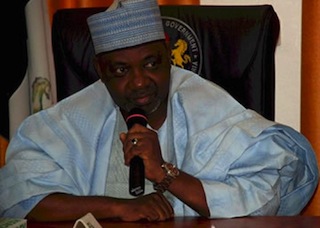 Vice President Namadi Sambo has stressed that perpetrators of evil cannot dampen the spirit of Nigerians with their evil acts and that terror will never gain ground in Nigeria or anywhere else in the world.

The Vice President stated this on Thursday, when he visited the site of the bomb blast at the EMAB Plaza Wuse II and also the injured victims who were admitted at the Maitama General Hospital, Abuja.

Sambo, while condoling the families of the victims of the bomb blast charged Nigerians to be extra security conscious and vigilant, appealing for cooperation with security agencies as they tackle crime and criminality in the country.

“This cowardly and unjust act will be defeated. Evil can never be sustained. This administration and Mr. President will not leave any stone unturned until we defeat these terrorists. Terrorism cannot survive in Nigeria or in any part of this world.

Sambo enjoined all Nigerians to be very vigilant. “We have to be very observant and report any suspicious act to the security agencies. I want to also urge us to resume our normal duties, our normal services and to cooperate with the administration so that we will jointly succeed in solving this problem.”

He was also briefed by the Assistant Inspector General of Police, Zone 7, Suleiman Abba, on the police preliminary investigations.