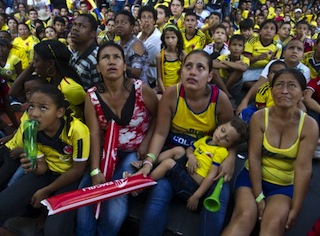 Officials said a 25-year-old woman was murdered Saturday in Bogota following Colombia’s World Cup win over Uruguay in what they initially said was an accident caused by a stray bullet fired in celebration.

After the game authorities said that someone celebrated by firing into the air, and that the bullet accidentally killed a woman in the Bogota neighborhood of Bosa.

But upon investigation, police determined that a gunman had targeted the woman, acting Bogota mayor Ricardo Bonilla said in a press conference.

“A hitman on a motorcycle opened fire on three people,” Bonilla said, killing one of them.

He described it as “the only deadly case” in the post-game celebrations.

However five people were injured after the game and 274 fights broke out, Bonilla said, citing preliminary figures.

Police said that national figures on game-related accidents and violence will be released on Sunday.

When Colombia beat Greece on June 14 police reported nine people dead, 150 vehicle accidents, and 3,000 fights. This happened despite Colombia’s ban on alcohol sales and increased policing during the matches.

In the next game, Colombia — which has not classified for a World Cup tournament in 16 years and reaches the quarter finals for the first time — will face powerhouse Brazil on July 4.