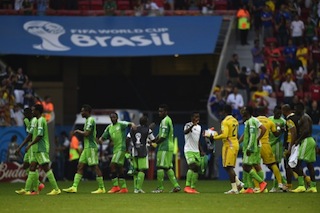 President of Nigeria Football Federation, NFF, Aminu Mohammed Maigari, has expressed heartfelt appreciation to President Goodluck Ebele Jonathan (GCFR), the Federal Government and all Nigerians for their support, after Nigeria exited the 2014 FIFA World Cup in gallant fashion on Monday.

A two–goal defeat to France in Brasilia ended the African champions run at the 2014 World Cup. Despite dominating the game in large parts, the spirited African champions could not find the back of the net. Yet, this still represented Nigeria’s best outing at the FIFA World Cup in 20 years.

“We must applaud Mr. President and the Government of Nigeria for the massive support the NFF and the team received all through the qualifying series and the tournament proper. Mr. President’s personal keen interest in the team saw us qualify for the finals and put up a credible campaign here in Brazil.

“The players were brilliant. They showed heart and commitment and deserve the praise of Nigerians for their efforts,” said Maigari in a statement made available to P.M.NEWS Sports by the Assistant Director (Media) of the NFF after the match on Monday.

Nigeria football supremo also hailed the support of his colleagues on the NFF board, NFF Management and staff, the National Sports Commission, members of the National Assembly, chairmen and secretaries of Football Associations in the states, top shots of the various leagues, top government officials from the states, former Nigeria coaches, former Nigeria captains and officials of federal agencies and parastatals who were in Brazil to cheer the team.

Paul Pogba headed the French in front from a corner and captain Joseph Yobo, on his 100th cap, got the wrong leg across to score in his own net in added time.

The score line was flattering to the French, who had to endure a scary first half as the Super Eagles spread their wings all over the pitch and even got the ball into the net, only for the referee to rule Emmanuel Emenike’s effort offside.

Nigeria continued to probe in the second period but the loss of energetic Ogenyi Onazi to midfield gave France the advantage.