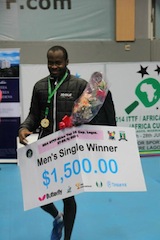 The reign of Egypt as African champions came to an end at the weekend when Nigeria’s Aruna Quadri dethroned the defending champion, Egypt’s El-Sayed Lashin in the final of the Africa Top 16 Cup played at the Teslim Balogun Stadium, Surulere, Lagos at the weekend.

Besides beating Lashin, Quadri achieved one of the biggest feats in his career, when he also dismissed the continent’s highest ranked player in the world, Egypt’s Omar Assar on his way to the epic final against the veteran Lashin.

For more than 20 minutes, Assar was glued to his seat after suffering a 4-1 defeat against Quadri in the semifinal tie of the tournament.

Buoyed by the 4-1 win over Quadri in the semifinal stage of the ITTF Lagos World Tour, Assar was 100 per cent sure that he would overcome the Nigerian. But his permutation and logic were wrong when he suffered one his biggest defeat in his career against Quadri.

However, the final encounter to decide the player that will hoist Africa’s flag at the ITTF World Cup later this year was the climax of the tournament.

Fans at the Molade Okoya-Thomas Hall of Teslim Balogun Stadium ensured that Quadri did not lack support as they cheered every point that the Nigerian won against the Egyptian.

Lashin and Quadri had met five times with the Egyptian winning all matches. But at the weekend, it was a different story entirely as Quadri gave the fans something to cheer with his superb performance against his opponent. In the end, it was Quadri who carried the day with a 4-3 win.

“I played very well because most of my matches with him have always been very close,”, said a delighted Quadri Aruna after beating Omar Assar.

“I did not make the same mistakes I made at the World Tour tournament; I made sure I played short whenever possible; this victory meant a lot to me and it is the beginning of a new era in my career because it will surely improve my ranking.”

“It was not an easy match but I am so happy winning”, said Dina. Meshref. “I am excited to represent Africa at the World Cup and I hope I can win a medal there.”

Quadri and Meshref have qualified for the respective Men’s and Women’s World Cup tournaments to be held later this year in October.