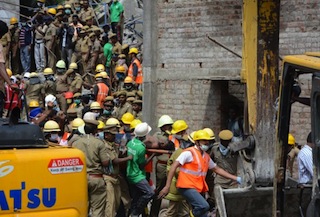 Rescuers plucked two survivors from the ruins of a collapsed apartment block in southern India on Monday as they raced against the clock to find dozens more people feared trapped in the rubble.

The confirmed death toll from Saturday’s disaster on the outskirts of Chennai rose to 18 as authorities blamed shoddy construction for what was the second deadly building collapse in India within a matter of hours.

Reports said that the two people rescued on Monday morning included a 35-year-old female construction worker who was one of several dozen entombed by a mass of concrete on Saturday night.

The woman had suffered a head injury, a hospital spokesman told the Press Trust of India news agency. A male co-worker was also being treated in hospital.

Emergency teams used mechanical diggers and heavy-cutting equipment to try and find more survivors in the ruins of what was a partially-built 11-storey complex.

The exact number of people still missing is not known but reports say as many as 40 could be trapped in the rubble. Around 20 people have so far been rescued since the late night disaster.

Karuna Sagar, a senior officer with the Tamil Nadu state police force, said the rescue operation was being complicated by fears that the removal of debris could cause “the whole thing (to) collapse”.

“There is all the possibility that there will be survivors, that is why we are going in a very systematic manner,” he told the NDTV network.

“The rescue team is cutting open boulders and going in with oxygen and lights… There may be pockets where some person (is still) alive”, he added from the site of the disaster.

The exact number of people still trapped in the wreckage was not known but rescuers could still hear voices in the debris, TS Sridhar, commissioner of the disaster management agency, told NDTV’s website.

Although there was some rain overnight, temperatures at the scene are around 40 degrees, and rescuers are worried that survivors could succumb to fatigue.

Police have detained at least five people for questioning, including the builder and engineers involved with construction, according to local newspaper reports.

Speaking on a visit to the scene of the disaster on Sunday night, Tamil Nadu Chief Minister Jayalalithaa Jayaram said the collapse appeared to have been the result of poor construction.

“From investigations conducted by our senior officers, it appears that the building plans that were approved were not strictly adhered to by the builders,” she told reporters.

The collapse in Tamil Nadu on Saturday came only hours after a dilapidated apartment block crumbled in the capital New Delhi, killing 10 people including five children.

In September last year more than 50 people were crushed to death when a five-storey building collapsed in India’s financial capital of Mumbai on the west coast.