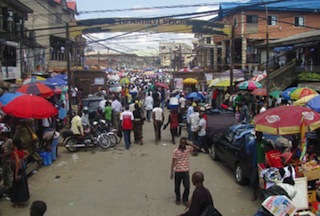 The Olu of Ikeja Kingdom, Lagos, southwest Nigeria, Oba Rauf Adeniyi Aremu Matemi, is dead. He was said to have died in his palace Tuesday after a brief illness.

All businesses and shops at Ikeja local government were closed down for business as a mark of honour for the departed monarch.

However, commercial vehicles and tricycles (Keke Napep) operators were seen going about with their businesses.

When P.M.NEWS visited the palace Wednesday morning, traditional rulers, Iyaloja, Baales, members of the Hausa community were there to mourn the monarch.

Some rituals were also being performed in his honour at the palace. Some traditional chiefs were seen wearing white wrappers as well.

When our correspondent tried to know the cause of his death, one of his chiefs who did not disclose his name, said media cannot be entertained as at the time of filing this report, adding that there are some rituals that needed to be carried out first.

“We can’t talk to the media now. There are some rituals that needed to be performed when an Oba dies and that is more important than what you came for.

“See, we don’t announce the death of a king on the pages of newspapers. By 3:00 p.m. your paper would have been out while we are yet to properly inform some Obas (monarchs) of his demise,” he said.