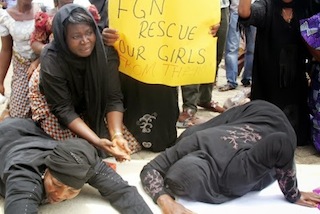 Villagers from Chibok town where Boko Haram Islamists abducted more than 200 schoolgirls on Friday appealed to the United Nations to intervene because of worsening violence in the region.

The community, which originates from the Chibok district of restive Borno state, claimed militants were running amok in their homeland, seemingly with impunity.

Local elder Pogu Bitrus told a news conference in the capital Abuja that Boko Haram had carried out 15 attacks on 19 villages in Chibok since the April 14 mass abduction, killing more than 200 people.

“The Chibok nation wishes to categorically state that the inability or unwillingness of the federal government to provide adequate security… following the abduction of the girls leaves us with no option than to call on the United Nations to use its apparatus to come to our aid and protect us from (our) imminent annihilation as a people,” he added.

Security experts say the over-stretched and under-resourced military is incapable of fighting an effective counter-insurgency against Boko Haram, which has killed thousands in its five-year campaign for an independent Islamic state in the north.

A state of emergency imposed in Borno and neighbouring Yobe and Adamawa in May last year forced its fighters out of urban centres.

But that has come at the expense of protecting people in the countryside, where attacks have increased dramatically, almost on a daily basis, analysts say.

Amnesty International claimed in May that military commanders in Borno had advance warning of the Chibok abduction but could not muster enough troops to send.

“Security and defence is mainly provided by the local vigilante, who are ill-equipped, and the police, while soldiers in Chibok sit by and watch villagers being helplessly massacred in their homes, farms and in places of worship,” Bitrus told reporters.

In 90 per cent of the attacks, the insurgents had given advance notice to security forces, who ignored the warnings, he claimed.

As a result, the Chibok community was urging the government to “go into immediate negotiation with the Boko Haram sect with a view to securing the safe release of the girls”, he added.