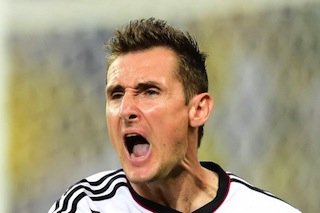 The World Cup resumes after a 48 hour lull in hostilities on Friday with two blockbuster quarter-finals, as France take on old rivals Germany and hosts Brazil clash with Colombia.

France and Germany get the last eight ball rolling at 1600 GMT at Rio de Janeiro’s mythic Maracana stadium, a fitting backdrop for these two European titans.

Then up the coast in Fortaleza, at 2000 GMT, Brazil’s talismanic poster boy Neymar comes up against Colombia’s James Rodriguez, the Monaco playmaker who tops the World Cup scoring chart with five goals.

Brazil’s build-up has been dominated by ‘cry baby’ headlines over the cascade of tears from the players at the nervy last 16 penalty defeat of Chile last Saturday. 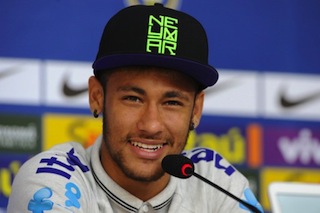 To ensure his men were in the right state of mind for the battle ahead coach Luiz Felipe Scolari wheeled in the team psychiatrist’s couch on Monday for a spot of therapy.

“I had never done anything like it before and I am quite enjoying it,” reported Neymar, fully fit despite thigh and knee injuries against Chile.

Captain Thiago Silva insisted the squad were capable of coping with the pressure.

“I think we are good psychologically. We are doing what we love to do,” the Paris Saint-Germain defender said.

Scolari, mastermind of Brazil’s fifth title in 2002, cut a confident figure at the eve of match press conference.

“Does Brazil continue to have one hand on the trophy? Yes,” he said.

“We are going on to the fifth step and there are seven steps.”

The fourth step caused 200 million Brazilian hearts to flutter as Chile gave the hosts the fright of their lives in a bruising encounter, only succumbing in the spotkick lottery.

Four eyecatching wins have propelled Colombia to uncharted territory at the World Cup to face a rival they have only beaten twice in 25 meetings.

“We need to play our own game as we have done up to now and try to impose our play on them,” Argentine coach Jose Pekerman reflected.

“The key is not to believe there is a favourite.”

Whichever team emerges triumphant from the face-off in Fortaleza will find either France or Germany waiting for them in Tuesday’s semi-final.

“Seven players have somehow got light flu-like symptoms,” Loew told German ARD radio, with the majority of those affected suffering from “sore throats”.

“I hope they will all be okay,” added Loew, who is confident his team can raise their game for a France side which has risen from the ashes of their miserable 2010 campaign.

“Didier Deschamps has turned France around since 2010 and we’re looking forward to another classic,” said Loew.

“We haven’t shown a consistent level of performance so far.

“We have not yet delivered our best possible performances, that is still to come.”

With Karim Benzema in top form, France are dreaming of their first World Cup title since their 1998 triumph on home soil.

“There is no apprehension or fear. There is no reason for us to feel any,” said 1998 World Cup winning captain Deschamps.

Friday’s match gives France the chance to avenge semi-final defeats to Germany in 1982 and 1986.

The ’82 semi-final in Seville produced one of the most controversial World Cup clashes when German goalkeeper Harald Schumacher flattened Patrick Battiston leaving the Frenchman with cracked ribs, two missing teeth and cracked vertebrae.

Friday’s games go ahead in the shadow of an overpass collapse in semi-final venue Belo Horizonte which killed two, and an illegal multi-million pound ticketing scandal involving a FIFA individual.

The quarter-final drama continues Saturday when the Netherlands play Costa Rica and Belgium take on Argentina.