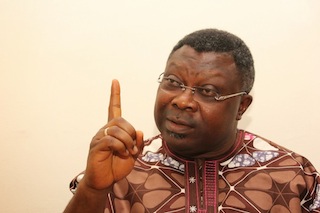 His acceptance was contained in a statement in Osogbo on Tuesday 8 July by Diran Odeyemi, Omisore’s Director of Media Affairs.

Aregbesola, All Progressives Congress candidate in the 9 August election, had thrown the challenge at the inauguration of Ayegbaju International Market on Tuesday in Osogbo.

However, the statement said the governor must ensure that security prevailed for the debate to take place. “Assurance of safety, among other things, would make Omisore to attend the debate.

“When an argument is being made between two different parties for instance, it may result in physical assault and harassment.

“The senator is a complete gentleman and a PhD holder. So, we need an assurance that there will be no physical assault on him,” the statement said.