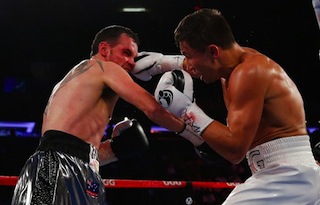 Golovkin sent Geale to the canvas in the second round with a barrage of blows.

In round three he responded to a hard right to the head from the Aussie challenger with his own punishing right to the nose, followed by a quick left that sent Geale down.

Geale, a former International Boxing Federation middleweight champion who fell to 30-3 with 16 knockouts, had no complaint when referee Michael Ortega called a halt at 2:47 of the round.

Golovkin, whose amateur resume included a silver medal at the 2004 Athens Olympics, improved to 30-0 with 27 knockouts.

Golovkin hasn’t gone the distance since winning an eight-round decision in 2008 and said keeping his knockout streak alive was important.

Golovkin had fought twice before in Madison Square Garden’s smaller Theater, but he had never before fought in the fabled Manhattan venue’s main arena.

After the bout, Golovkin said he wanted a unification bout with World Boxing Council champion Miguel Cotto — the Puerto Rican who is a longtime favorite of Garden fans.

“I want a unification fight. I want who is the best in the middleweight division,” Golovkin said, adding, when pressed: “Miguel Cotto — I respect him 100 percent.”