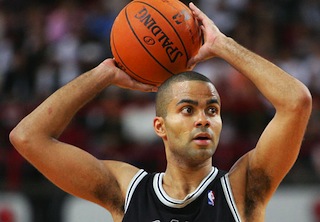 No contract terms were released but the 32-year old Frenchman’s deal reportedly was for three years at $45 million (33.5 million euros), according to Yahoo Sports.

Parker, a 13-year NBA veteran, averaged a team-high 16.7 points, 5.7 assists and 2.3 rebounds last season as he led the Spurs to their fifth NBA title, the fourth with Parker on the squad.

Parker, who led the Spurs in scoring for the fourth consecutive season, was San Antonio’s lone player in last season’s NBA All-Star Game.

Since being selected by the Spurs with the 28th overall pick in the 2001 NBA Draft, Parker has averaged 17.1 points, 6.0 assists and 3.0 rebounds in 940 regular-season games.