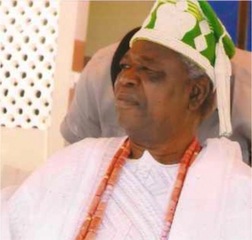 The Ayangburen of Ikorodu, Oba Salaudeen Oyefusi (Oguntade II) is dead. He died on Saturday at the age of 83.

Sources in the palace said the oba died in London around 7:30 pm on Saturday after he had gone to seek medical attention to his ailing health.

Personal Assistance to the Oba, Mr Tunde confirmed that the oba died on Saturday but refused to give details.

It was gathered that the oba has been sick since May this year, but the nature of the ailment could not be ascertained. He has not been functioning or receiving visitors in his palace due to the nature of his ailment.

Born on 8 July, 1931, Oyefusi was installed Ayangburen of Ikorodu in September 1971.

Details of his funeral would be announced by the palace later. The palace of the oba is expected to issue a statement to formally announce the demise of the oba later today or tomorrow.