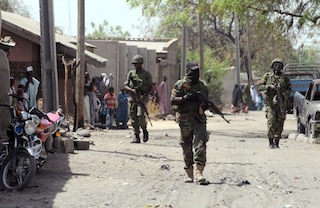 Military on patrol in northeastern Nigeria

Nigeria army and Civilian Joint Task Force (CJTF) have been implicated of war crimes after evidences were unearthed by Amnesty International. Gruesome video footages, images and testimonies gathered by Amnesty International provided fresh evidence of war crimes, including extrajudicial executions, and other serious human rights violations being carried out in northeastern Nigeria as the fight by the military against Boko Haram and other armed groups intensifies.

The footage, obtained from numerous sources during a recent trip to Borno state, reveals graphic evidence of multiple war crimes being carried out in Nigeria.

It includes horrific images of detainees having their throats slit one by one and dumped in mass graves by men who appear to be members of the Nigerian military and the “Civilian Joint Task Force” (CJTF), state-sponsored militias. It also shows the aftermath of a Boko Haram raid on a village in which the armed group killed nearly 100 people and destroyed or badly damaged scores of homes and other buildings.

Salil Shetty, Amnesty International’s Secretary General said: “This shocking new evidence is further proof of the appalling crimes being committed with abandon by all sides in the conflict. Nigerians deserve better – what does it say when members of the military carry out such unspeakable acts and capture the images on film?”

“These are not the images we expect from a government which sees itself as having a leadership role in Africa. The ghastly images are backed up by the numerous testimonies we have gathered which suggest that extrajudicial executions are, in fact, regularly carried out by the Nigerian military and CJTF.”

More than 4,000 people have been killed this year alone in the conflict by the Nigerian military and Boko Haram, including more than 600 extrajudicially executed following the Giwa Barracks attack on 14 March in Maiduguri.

In recent months, the conflict has intensified in north-eastern Nigeria, spreading to smaller towns and villages which are now increasingly on the front line. In July 2014 Damboa in Borno state became the first town to fall under the control of Boko Haram since President Goodluck Jonathan declared the State of Emergency in May 2013.

The heavy-handed behaviour of the military also caused shock waves in Kaduna state in July. Twelve people from a mostly-Shia sect led by Sheikh El Zakzaky appear to have been killed in custody by the Nigerian military. They were arrested after taking part in an apparently peaceful protest, in which 21 other protesters, including two children of El Zakzaky, were also killed after the military opened fire on them.

Amnesty International said the federal government should ensure that the military stops committing human rights and humanitarian law violations. All reports of extrajudicial executions and other war crimes and serious violations must be investigated promptly, thoroughly, independently and impartially, with those responsible – up the entire chain of command – brought to justice.

Shetty noted that: “Members of Boko Haram and other armed groups are responsible for a huge number of heinous crimes – like the abduction of the schoolgirls in Chibok more than three months ago – but the military are supposed to defend people, not to carry out further abuses themselves.”

“A state of emergency must not give way to a state of lawlessness. Sadly, the same communities are now being terrorized in turn by Boko Haram and the military alike.”

THE GRUESOME VIDEO
The footage obtained by Amnesty International includes a gruesome incident that took place near Maiduguri, the Borno state capital, on 14 March 2014. It shows what appear to be members of the Nigerian military and CJTF using a blade to slit the throats of a series of detainees, before dumping them into an open mass grave.

The video shows 16 young men and boys seated in a line. One by one, they are called forward and told to lie down in front of the pit. Five of them are killed in this way; the fate of the remaining detainees is not shown on video, but eyewitness accounts confirmed that nine of them had their throats cut while the others were shot to death.

Additional footage featuring some of the same perpetrators, taken earlier that day at the same location, shows two detainees digging a grave under armed guard before the killing is carried out. One is told to lie down in front of the pit, where his legs and head are held by what seem to be CJTF members. The individual who appears to be the commander of the group puts his right foot on the man’s side, raises his knife, kisses it and shouts “Die hard Commando” and cuts the throat of the restrained young man. All other military and CJTF shout “Yes oga [boss], kill him”.

Amnesty International spoke to several military sources who independently confirmed that the armed captors in the video were indeed military personnel, and according to two credible sources, they may be part of the 81 Battalion, based in Borno State.

No buildings, roads or other infrastructure can be seen in the video but the noise of cars confirms that it is near a road. Several of the armed captors were wearing military uniforms, one of which has the words “Borno State Operation Flush” emblazoned on the front. The ID number on one of the guns is also clearly identifiable (81BN/SP/407). According to military sources, the rifle belongs to the Support Company of the 81 Battalion and it has not been reported missing.

Eyewitnesses also confirmed to Amnesty International that the videos were taken on 14 March 2014, the day of Boko Haram’s attack on the military detention centre in Giwa Barracks in Maiduguri. Boko Haram forces reportedly released their members and told all other detainees to either join them or go home. After Boko Haram had left the town, more than 600 people, mostly recaptured detainees, were extrajudicially executed in various locations across Maiduguri. The detainees in the video were rearrested by the CJTF in Giddari Polo, near the Barracks, where various sources have confirmed that a number of other recaptured detainees were shot and killed by soldiers after being handed over to the military. The military then took the corpses and the detainees to a location outside Maiduguri, near Giddari, where the executions are reported to have been carried out and recorded on camera.

Bama is one of the many communities that has been a focal point of the violence over the past two years. It has frequently been targeted in armed raids by Boko Haram and has also been singled out at least twice by the Nigerian military for mass arbitrary arrests of people whom they allege are Boko Haram members.

Residents told Amnesty International about a “screening” operation which took place on 23 July 2013 when scores of Nigerian military and CJTF from Maiduguri arrived at the central market around 11:00 a.m. and told all the adult men to gather in one area and take off their clothes.

According to eyewitnesses, the men were then lined up and, one by one, told to close their eyes as they were pushed in front of a man seated in a vehicle. The man then indicated left or right. Up to 35 men who were sent to the left were alleged to be Boko Haram members. The remaining 300 or so were sent to the right, deemed to be innocent.

The video evidence obtained by Amnesty International corroborates multiple eyewitness accounts of what happened next. The Nigerian military and CJTF members ordered those alleged to be Boko Haram members to lie down side by side on the ground, and then beat them with sticks and machetes. One eyewitness told Amnesty International the military officials shouted: “You have to beat, even kill these; they are Boko Haram.”

The footage showed that during this “screening” operation, the military and CJTF fired celebratory shots in the air. Up to 35 detainees were then loaded onto a single military vehicle and taken away to the local military barracks in Bama.

Several days later, on the afternoon of 29 July, military personnel took the men out of the barracks and brought them to their communities, where they shot them dead, several at a time, before dumping their corpses. One local resident told Amnesty International how the gunshots rang out from around 2:00 p.m. into the evening as soldiers shot and deposited the bodies in different places around the town.

A relative of one of the extrajudicially executed men described the aftermath: “At that time everyone was aware that these people [had been] killed, [and] started running to look. We found [our relative] near Bama bridge. Plenty of people were with us. They [had] shot five of them [in that location alone]. There were five bodies including [my relative]. He had a bullet hole in his chest and no clothes, only trousers. We took the body and buried it. There is no death certificate; Bama hospital is not functioning. There is no place to complain; the town has restricted movement. Everybody left what happened to God.”

Deadly Boko Haram raid
Like many other communities in north-eastern Nigeria, Bama’s residents have been living in constant fear of attacks by Boko Haram and other armed groups. These are sometimes believed to be in retaliation for what the armed groups deem to be the local residents’ co-operation with the Nigerian military. Many of the attacks are met with little resistance by the military.

Boko Haram staged its most deadly assault on the town over the course of several hours early in the morning of 19 February 2014, which locals report left almost 100 people dead and more than 200 injured. Improvised explosive devices and grenades were used to destroy huge swathes of the town.

“The insurgents had a field day, killing, burning and demolishing,” one Bama resident told Amnesty International.

Video footage taken in the aftermath of the attack shows the charred remains of numerous cars and buildings, including fire damage to the top floor of the local Emir’s (Shehu’s) palace. Eyewitnesses told Amnesty International that schools and other administrative buildings were also bombed or torched, and more than 100 residents’ vehicles were destroyed.

The footage from the aftermath shows scores of corpses wrapped for burial.

“Amnesty International is calling for an immediate, independent, impartial and thorough investigation into the pattern of serious and systematic violations of human rights and international humanitarian law by all sides that is emerging in north-eastern Nigeria.

“The Nigerian government must publicly condemn such acts, including reports of arbitrary arrests, incommunicado detention, enforced disappearances, torture and other ill-treatment, and extrajudicial executions carried out by the Nigerian military.”