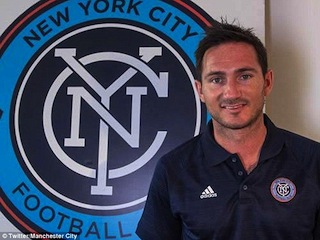 Lampard, 36, signed for New York City last month and will play with their sister club Manchester City until January in order to maintain his fitness prior to the start of the 2015 Major League Soccer season in March.

“Joining up with Manchester City is a fantastic opportunity for me to continue to train and play at the top level and make sure I am in top condition for New York City,” the England midfielder told the City website.

“It has been an amazing few days for me since the unveiling in Brooklyn and everyone connected with both clubs has been fantastic to me. This is a new chapter of my career and I’m really excited about the experience.

“I met Manuel (Pellegrini, the City manager) and some of the players in New York and I’m looking forward to getting into training and making a contribution for Manchester City ahead of my move over to New York.”

Lampard was due to train with City for the first time on Wednesday and Pellegrini said he was excited about working with the former Chelsea midfielder, who will wear the number 18 shirt.

“Frank is a world-class midfielder and this is an opportunity which works perfectly for everyone: the player, Manchester City, and New York City,” said the Chilean.

“I’m looking forward to working with him and integrating him into our squad. New York have made a fantastic signing by recruiting Frank, and I’m really pleased that we’ll be able to have him with us for the first half of our season and help prepare him for his new challenge.”

“He is in great shape following the World Cup, and training and playing with our colleagues in Manchester will enable Frank to be fit and ready for our inaugural training camp.”