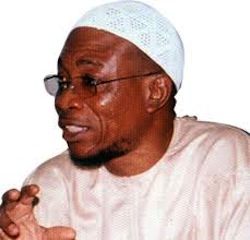 The governor said this during the launch of the students’ smart identity card at Salvation Army Middle School in Alekuwodo that Obanikoro and the Police Affairs Minister, Jelil Adesiyan have instructed security personnel to shoot and kill two of APC members.

Aregbesola warned that should anything happen to any member of the APC in Osun ahead of the 9 August election, Obanikoro should be held responsible.

He called on security agents to play by the rules, saying with what happened at the Nelson Mandela Freedom Park Wednesday morning, where people who were supposed to campaign for APC were turned back by security agents while same security agents allowed People’s Democratic Party (PDP) campaign in Alekuwodo in Osogbo, should not repeat itself.

Aregbesola wondered why Obanikoro was in Osun and warned that although memnbers of APC have been told to be law-abiding, if pushed to the wall, they will react.

“How could a party like the PDP be this desperate, Obanikoro with Jelili Adesiyan told the security agents that by the time two members of the APC are shot at and killed by the police, other members will learn from it, and with that the stiff resistance of APC will be destroyed.

“We want to use this medium to appeal to our security agencies not to allow themselves to be used by these PDP candidate and the two ministers whose party before this administration had been terrorising the good people of our state.‎

“I am using this medium to tell the security operatives that Osun people are law-abiding people, they have always been contributing to the payment of your salaries and you are not supposed to harass them with the guns which were bought for you with tax money,” Aregbesola said.
‎
‎On the smart Identity card for students, the governor said that information Communication Technology is among other promising paths his administration has chosen to deliver in the march towards realising the state’s development dream.‎

With the launch of this smart identity card, Osun becomes the first state in Nigeria to provide it’s students with a card that contains all information that may be required on the student.