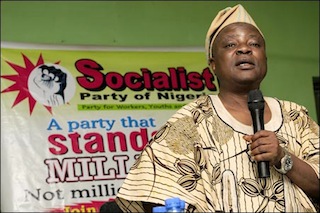 The Socialist Party of Nigeria (SPN) has accused the frontrunners in the 9 August governorship election in Osun state of ‘stomach infrastructure’ type of campaign. The party claims that the All Progressives Congress (APC) and People’s Democratic Party (PDP) are inducing voters with money, rice, milk and kerosene, a phenomenon known in Nigeria as ‘stomach infrastructure’.

“This ridiculous act of inducing poor voters with basic things like rice, milk, kerosene, etc, now referred to as Stomach Infrastructure has again underscored the low level governance in this country,” SPN said in a statement signed by Alfred Adegoke Kola Ibrahim, the party’s secretary in Osun.

SPN said it was worried that the two main parties associated with “this unwholesome act – APC and PDP – are both ruling political parties at the state and federal levels.”

“These same political parties have introduced anti-poor policies that deny the same mass of people the right to better living conditions without depending on handouts from politicians.

“For instance, the PDP has been in control political power at the federal level since the beginning of civilian rule in 1999, yet poverty, want, unemployment, collapsed education system, collapsed infrastructure and social strife have been the lot of the country,” the party said.

It explained that between 1999 and 2013, poverty has climbed from 54 percent to more than 70 percent, while youth unemployment has risen to well over 50 percent.

“Yet, the country has earned more than $700 billion from oil since 1999. While the majority of the population is living in want, just one percent of the population is controlling over 80 percent of our oil wealth. It is this rotten economic arrangement, premised on capitalist neoliberal policies of privatization, commercialization, liberalization, deregulation, etc that have made access to comfortable living difficult for majority,” SPN said.

The party said the PDP governorship candidate in the Osun election, Iyiola Omisore is “part and parcel of this rot.”

‎”He was the chairman of the Senate Committee on Appropriation between 2007 and 2011, who supervised the budgets that deny the people basic means of livelihood but ensure more wealth for the tiny rich minority,” the party said.

SPN said the Ife-Ilesa road dualization, which was started more than five years ago, has been abandoned with no one explaining where the monies appropriated for it have not been accounted for.

It said Rauf Aregbesola, the APC, candidate has also not been successful after four years in power.

It called on the voters to reject both the PDP and the APC and build an alternative political party with pro-poor and pro-ma‎sses programmes.